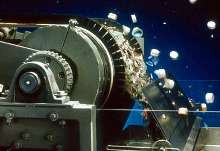 Eddy Current Separator with Erium(TM) 3000 Rare Earth Magnetics is the Most Effective in Capital Cost, Operating Cost and Separation Efficiency

Eriez is recognized as world authority in advanced technology for magnetic, vibratory and metal detection applications. The company's magnetic lift and separation, metal detection, materials feeding, screening, conveying and controlling equipment have application in the process, metalworking, packaging, recycling, mining, aggregate and textile industries. Eriez manufactures and markets these products through nine international facilities located on five continents. To receive Eriez' SB-780 brochure on Eddy Current Separators, call toll-free in the U.S. and Canada at (888) 333-(ERIEZ) 3743 or (814) 835-6000. For online visitors, download a pdf at www.eriez.com or send Email to eriez@eriez.com
Share