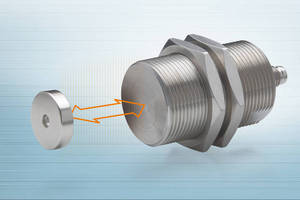 
Due to be launched at the Hanover Trade Show and Sensor + Test, is a new product range from Micro-Epsilon called mainSENSORs ("Magneto-inductive"). The standard MDS-40 M30 industrial version has a 40mm measuring range and an M30 cylindrical stainless steel housing. The OEM alternative, the MDS-40MK, has a miniature square plastic housing and also provides a 40mm measuring range. Other advantages of these sensors are their very compact design relative to the measuring range, as well as extremely attractive price-performance ratios.

Over many years, Micro-Epsilon has been renowned as a specialist supplier of eddy current displacement sensors. This technology enabled the technological core of the new sensors range to be developed. The new sensors offer a combination of high speed and high resolution measurements. The sensors also benefit from extremely high basic sensitivity and temperature stability. A small permanent magnet on the measurement object is used as the target. The signal output provides 4-20mA or 2-10V DC.

In contrast to the widely used Hall Effect principle, the MDS is based on a unique method patented by Micro-Epsilon, which is based on a linear relationship between the position of the magnet and output signal. Due to the inhouse capabilities, Micro-Epsilon is able to manufacture the complete sensor in-house as semiconductor manufacturing is not necessary. Therefore, the MDS range of sensors provide an interesting alternative to conventional displacement sensors for OEM applications, both in mechanical and plant engineering, as well as in the automotive industry and white goods.
Share