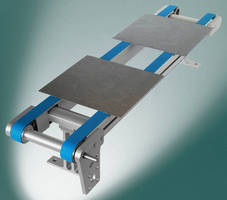 Suited for wafer/solar cell manufacturers, conveyor is comprised of supporting frame and 2 belts driven in synchronous mode. It can be used in wet/dry processes, and possible wafer debris can be discharged through gap between belts. Supplied complete with belt or toothed pulley, conveyor has no protruding parts that might interfere with transport. Modular nature enables tailoring to specific needs in terms of length and width, and structure can also be adapted to individual machines.

Conveyors for the Solar Industry

(Huntersville, February 6, 2009) Montech will be introducing its conveyors designed for the solar industry at the Photovoltaic Technology Show 2009, in Munich from March, 4-6 2009. The Swiss company has developed a belt conveyor specifically designed for wafer transport. With the new conveyor, the manufacturers of turnkey plants for the solar industry and equipment for the processing of wafers or solar cells can carry these delicate parts in their plants. The belt conveyor for wafers consists of a supporting frame and two belts driven in synchronous mode. Possible wafer debris can be discharged through the open gap between the two belts. The wafer conveyor can be used in wet and dry processes. Adapting to requirements Thanks to its modular concept, the belt conveyor can be tailored to the specific needs of each user in terms of length and width. The conveyor structure can also be selected freely and adapted to each machine individually. The conveyor can be supplied complete with belt or toothed pulley. Among the peculiarities of the wafer conveyor, the whole structure can be assembled and dismantled from above, and the belt itself can be replaced without disassembling the supporting frame. No protruding elements The wafer conveyor developed by Montech has no protruding parts that might interfere with transport. In this way, delicate wafers are carried with high accuracy and great care. The cost of spare parts is limited, as the belt conveyor consists of few components. "With the belt conveyor for wafers, we have created a specific solution for the product and process needs of the solar industry", said Gianluca Aloisi, Conveyors Division Manager, Montech AG. According to Aloisi, as a belt conveyor specialist, Montech can provide customers with a specific solution for their needs, allowing them to focus on their core business. The wafer conveyors will be exhibited at the Photovoltaic Technology Show in Hall C2, Stand D8. Companies interested in the new solution can request more information by calling 704.655.6400.