(Bay St. Louis, MS, March, 13) -- KAT Technology founder and president David Avina has introduced a patented continuous dry filtration pollution control system that eliminates fugitive emissions occurring during filter cleaning cycles that reduce the system's efficiency. This system uses baking soda and other alkaloids to remove harmful pollutants such as acids, heavy metals, carbon dioxide, and particulates now mandated by the Clean Air Act. This new technology can be applied at a cost of $50 million dollars, significantly lower than current wet scrubbing technology which costs anywhere from $175 - $200 million dollars, and exceeds both today's regulatory standard as well as those required by 2018. This effectively opens the door for domestic "clean energy" in the US by utilizing available coal resources without negatively impacting the U.S. economy while simultaneously improving the environment.

While waiting for governmental and industry acceptances of continuous dry scrubbing technology, KAT narrowed the focus of his investigation from outdoor to indoor environments. To apply this highly effective dry scrubbing technology to indoor environments, a problem had to be solved. This required finding a balance between a quietly operating fan and high pressures vital to effective dry filter systems.

A solution was found while investigating boundary layer propulsion. Discovered in the early 1900's, boundary layer is an attraction between air and liquid to a solid surface. Presently, the boundary layer is studied as a drag effect on a moving object such as an airplane wing. KAT's propulsion company KineticAire, uses this drag effect to move air or liquid without turbulence, caused by pitched blades found in blowers, pumps, or turbines. This method produced a quiet, powerful, and energy efficient propulsion system. KineticAire's Patent Pending discovery of a solid disk boundary layer turbine offers a three fold benefit providing more pressure and flow while using 25% less power than current pitched blade technology.

With a proven ability of removing pollutants, and improved propulsion, KAT formed KlearAire to combine these technologies into an indoor air scrubber. The indoor air scrubber has been tested and found to be effective in removing various chemicals, biological media such as mold, heavy metals, dust, and animal odors within an attractive and quiet cartridge system for use in a home or office. 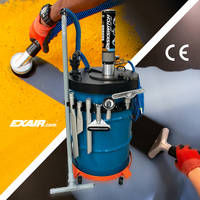