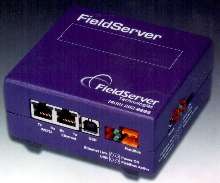 TIWAY driver enables devices using TIWAY 1 protocol to interface with other devices and networks in plant that use other drivers such as DH+, Profibus, Modbus, or ControlNet. With driver and FieldServer Gateway, PLCs using TIWAY protocol can be integrated as part of plant network. Any information available through communications port can be translated into alternative protocol. TIWAY Gateway can act as client, server, or both.

September 3, 2003 - FieldServer Technologies, a Sierra Monitor Company, announces the new TIWAY Driver for their series of Protocol Converters and Gateways.

The TIWAY driver enables devices using TIWAY 1 protocol to interface with other devices and networks in the plant that might be using other drivers such as DH+, Profibus, Modbus, ControlNet or more. Devices utilizing the TIWAY protocol include the SIMATIC series PLCs from Siemens. With the TIWAY driver and the FieldServer Gateway, such PLCs no longer have to be independent devices but can be part of the plant network. This communication is fast and complete, any information available through the communications port can be translated into the alternative protocol. The TIWAY Gateway can act as either a client or server, or in some situations can act as both.

In addition to TIWAY an extensive protocol driver library is available from FieldServer Technologies to meet other interoperability challenges. No other manufacturer has as broad a library. Drivers for process control devices, fire alarm panels, building control systems, and other systems are available for the FieldServers.