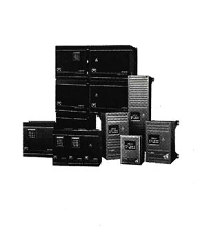 Model PSC Press/Shear Control program is embedded within drive controller, eliminating need for external control rack. When used in conjunction with PLC, it forms automation work cell that can either stand alone or be integrated with other automation cells to build complete control system. Software module can be embedded within various company ac and dc drives, in ranges of 1 to 1000 hp.

Improve Performance, While Reducing Complexity, With The Press/Shear Smart Drive

IMPROVE PERFORMANCE, WHILE REDUCING COMPLEXITY, WITH THE PRESS/SHEAR SMART DRIVE

Franksville, WI - UNICO, Inc. announces the release of the (PSC) Press/Shear Control "Smart" drive. UNICO has taken over 34 years of experience in industrial applications and designed the PSC specifically for controlling press and shear applications. The program is embedded within the controller of a UNICO drive, eliminating the need for an external control rack. When used in conjunction with a programmable controller, the drive forms a powerful automation work cell that can either stand alone or be easily integrated with other UNICO automation cells to build a complete control system. Embedded control reduces system complexity while taking full advantage of the exceptional performance, flexibility, and ease of use of UNICO drives.

The PSC software module can be embedded within various UNICO drives, from the low cost 1105 to the high performance 2400. Both AC and DC drives are available in ranges of 1 to 1000 Hp.

The PSC has many features, including eight programmable real-time outputs, which indicate discrete press positions, eliminating the need for mechanical cams. The outputs offer advance and retard delays based upon press speed. There is also a spinning load feature. This feature allows the drive to resume a speed that is synchronized with flywheel speed. This eliminates the need to stop the flywheel before restarting the drive.

In addition, a regeneration limiting feature prevents excessive use of the dynamic braking resistors by limiting the power absorbed during deceleration.