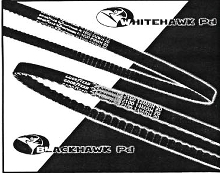 CHICAGO, March 18, 2002 - With eyes like a hawk, Goodyear has drawn a bead on virtually every competitor's high-capacity synchronous belt application, thanks to two new universal tooth profile belts.

With so many tooth profiles and horsepower ratings in the marketplace - and ultimately on production lines - there is a need for a tooth design that fits as many drives as possible, said Lee.

"WhiteHawk and BlackHawk fit the bill and outperform competitive belts in sprocket profiles found on many Gates, Dayco, Browning and other high-capacity drives," he said. "And our parts numbering system is compatible with industry numbers for ease of ordering." Both belts contain Goodyear's Hibrex rubber compound, increasing load-carrying capacity and allowing narrower belt-drives, compared to conventional systems. The compound is an oil-resistant, cross-linked elastomer formulated to increase tooth rigidity.

Lee said tests demonstrate that a 20mm-wide WhiteHawk can replace an existing 30mm belt drive system, creating drive-cost savings of up to 15 percent. Tests also showed that BlackHawk, with its Flexten tensile member, is stronger and more stable, outperforming traditional drives in tests.

"BlackHawk lasts up to three times longer than a competitor's comparably-sized belt, which can reduce costly downtime," he said.

He added that each belt tooth profile has Goodyear Plioguard facing to resist abrasion, reduce friction and ratcheting, and engage sprockets smoothly.