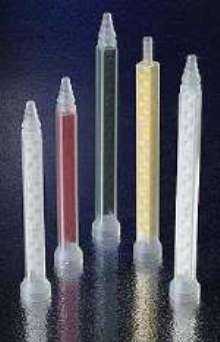 The Turbo is TAH's newest disposable static mixer. This patent-pending design ensures superior mixing performance and allows the operator to be closer to the work piece for more accurate applications. The square geometry consists of a series of alternating left and right hand elements with intermittent flow inverters. The flow inverters effectively channel the fluids from the walls into the center of the mixer.

The Turbo disposable mixer is available in 18, 24 and 36 element configurations and also with an integral nut design.