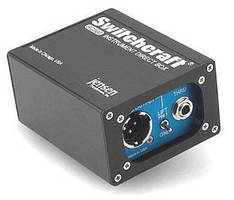 Model SC800 Instrument Direct Box converts outputs of high-impedance line level audio devices to low-impedance, balanced, and isolated mic level signals. Product offers common mode rejection of greater than 100 dB at 60 Hz as well as input impedance of greater than 150 kW at 1 kHz and output impedance under 170 W at 1 kHz. Total harmonic distortion plus noise is less than .05% at 20 Hz, +4 dBu and under .006% at 1 kHz, +4 dBu. Frequency response is 10 Hz to 40 kHz Â± 0.3 dB.

The SC800 was developed with one goal in mind... to provide audio engineers and musicians with the highest quality passive direct box available today.

Built by hand in Chicago, USA.

All measurements were taken with a 25 W source into a 1 kW load measured on XLR output.