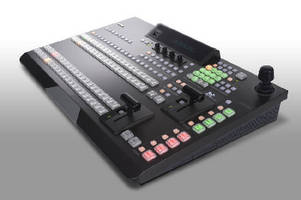 
Fort Lee, N.J., - FOR-A, a leading manufacturer of video and audio systems for the broadcast and professional video industries, will introduce the HVS-350HS HD/SD 1.5 M/E Digital Video Switcher at the 2010 NAB Show in Las Vegas, Nev., April 12-15 (Booth C5219). A "big brother" to the popular and cost-effective HVS-300HS, the HVS-350HS switcher is ideal for mobile production units and small control rooms that have limited space but produce challenging programs, such as sports and other live events. FOR-A will also showcase the HVS-300RPS, an upgraded version of the HVS-300HS with a redundant power supply, at the show.

"Since its introduction, the HVS-300HS has seen incredible success in several markets such as houses of worship, education, and corporate video production," said Hiro Tanoue, president, FOR-A Corporation of America. "Our customers have been impressed with its compact footprint and big, cost-effective performance. Our latest addition to the product line, the HVS-350HS, adds 1.5 M/E functionality, more inputs, and more standard features - without dramatically increasing the size of the switcher or control panel. It is the perfect addition to the HVS-300 Series of Hanabi switchers."

The HVS-350HS provides eight inputs and outputs standard, which can be expanded to 24 inputs and 12 outputs. HD/SD-SDI I/O is standard, though a variety of other formats can be installed to support analog video and PC sources. Its 10-bit processor supports 1080i, 720p, NTSC, and PAL formats. Built-in frame synchronizers on each input and a resizing engine on four inputs allows asynchronous signals - including HD, SD, analog, and PC signals - to be switched in the same program.

Other standard features include two keyer and four DSK channels, four still stores, and a dual channel 16-split multi-viewer. The HVS-350HS also provides more than 100 2D and 3D transitions and effects, along with two channels of dedicated picture-in-picture, event memory and sequence functionality, and an on-screen display for easy setting changes.

A new 1.5 M/E traditional control panel, optimized for the HVS-350HS, features 20 bus buttons, dedicated fade levers for M/E and P/P buses, three-axis joystick, and a USB interface for saving and reading still store content or switcher parameters. The control panel is connected to the 3 RU main unit by a single BNC cable. There are four additional ways to operate the HVS-350HS, including a new 1.5 M/E rack-sized operation unit and PC-based control software. The control panel and compact remote panel developed for the HVS-300HS can also be used but are limited on some functions.

In response to customer requests, the HVS-300RPS is a redundant power supply version of the HVS-300HS. It has a slightly larger main unit than the original HVS-300HS, but can still be controlled with the same control panels.

FOR-A is a major manufacturer and distributor of video and audio systems to the broadcast, postproduction and professional video markets. For more information about FOR-A's product line, call 201-944-1120 or visit our web site at www.for-a.com.
Share