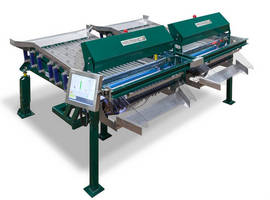 Able to inspect as many as 4,500 ears of corn per minute, Veo™ Max enables output of multiple huskers to be consolidated and fed toÂ one digital sorter. Vision system and software algorithms enable recognition ofÂ color, texture, shape, and size to detect and automatically remove ears with husk remainingÂ with 98% sort efficiency. Able to be configured as 2- or 3-way inspection systems, machine integrates Iso-FloÂ® vibratory infeed system and can sort any size and variety of seed corn ear.


Key Technology expands its popular Veo™ family of seed corn ear sorters with the introduction of the new Veo Max. Featuring a unique high-capacity configuration that enables the output of multiple huskers to be consolidated and fed to a single digital sorter, Veo Max inspects up to 4500 ears of corn per minute. Veo sorters automatically remove seed corn ears with remaining husks to maximize process efficiency and product quality, while reducing manual labor in the husk room by up to 75 percent.

“Every Veo sorter addresses the challenges of low labor availability and high labor costs. Veo Max, with its new configuration and high throughput, also addresses space limitations and the need for expanded layout options in high-volume husk rooms,” said Marco Azzaretti, Advanced Inspection Systems Product Manager at Key Technology. “Veo Max offers processors the flexibility to consider a layout where multiple huskers feed a single sorter. This is different than the typical layout, which has a dedicated Veo 8, Veo 12, or Veo 16 sorter matched to each individual husker.”

Prior to the introduction of the first Veo in 2010, seed corn processors relied on laborers to inspect ears after the automated husking operation to remove ears with significant husk remaining, since this can inhibit the downstream drying process and affect seed quality. Attending to a 16-lane husker, which typically requires up to eight laborers without Veo, will need only two laborers with Veo. Based on a single-shift operation, customers can achieve payback on a Veo sorter in less than two seasons given the system’s ease of installation and low cost of ownership.

With 98 percent sort efficiency, Veo deflects ears with residual husk to be re-husked. Compared to manual sorting, Veo improves the consistency of the inspection operation and better controls the quality of product.

Veo is capable of sorting any size and variety of seed corn ear, including yellow corn on red cob, yellow corn on white cob, and white corn on white cob. With its patented vision system and proprietary software algorithms, Veo recognizes color, texture, shape, and size to detect and remove ears with husk remaining, even when the husk is the same color as the kernels. The processor defines the exact amount of husk coverage that will actuate Veo’s reject system.

Veo Max and other Veo sorters can be configured as two-way or three-way inspection systems, as needed. Three-way sorters feature three separate discharge streams. Seed corn processors using three-way sorters often dedicate one reject stream to removing unhusked ears, which are circulated back to the husker, while the second reject stream is dedicated to waste, and the accept stream receives only good ears ready to go on to further processing.

Veo seed corn sorters feature an integrated Iso-Flo® vibratory infeed system designed specifically for seed corn ears, which assures optimal presentation of ears to the vision system to maximize the effectiveness of the inspection process while minimizing kernel loss. The integrated system is designed for easy installation – a Veo sorter can be installed downstream of any husker of any size from any manufacturer, with minimal changes to existing seed corn production lines.

Easy to use and easy to maintain, Veo requires minimal operator interaction. These affordable sorters are built for rugged reliability and years of trouble-free operation, as demonstrated by hundreds of successful Veo installations worldwide. Veo features an intuitive control panel and graphical user interface (GUI). Veo sorters can be controlled individually or networked to enable multiple sorters to be controlled at the same time, either on the plant floor or remotely. Veo’s real-time and on-demand diagnostics minimize costly downtime and alert the operator about conditions that could compromise inspection performance.

For more information about the Veo family of sorters, visit www.key.net/products/veo-sorter.

Key Technology, an ISO-9001 certified company, is a global leader in the design and manufacture of process automation systems including digital sorters, conveyors, and processing equipment. Applying processing knowledge and application expertise, Key helps customers in the food processing and other industries improve quality, increase yield, and reduce cost. With worldwide sales representation, the company maintains demonstration and testing facilities at its headquarters and manufacturing divisions in Walla Walla, Washington, USA; and at Key Technology in Beusichem, the Netherlands and Hasselt, Belgium. The company's common stock trades on the Global Market tier of The NASDAQ Stock Market® under the symbol KTEC.