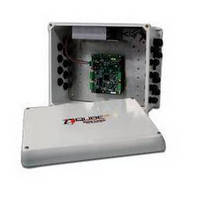 Housed in NEMA 4X polyester or stainless steel enclosure, iQUBE2 includes 4 channel boards, with or without power supply. Unit offers 4 digital I/O per card and enables up to 16 load cells to be connected. Onboard diagnostics identify noise, test for linearity and zero reference, and monitor drift. Load cell emulation feature compensates for failing load cell until repair can be made, while Cal-Match algorithm automatically trims and calibrates scale in one pass of test weights.


iQUBE2 is leading a new generation of digital junction boxes. At the forefront of iQUBE2's cutting edge design are enhanced features that will redefine expectations for traditional analog to digital technology.

For mission-critical applications and unmatched performance, iQUBE2 is the equipment of choice. Its high-speed ability to update up to 500 times per second on multi-channels makes it the fastest smart junction box available. Unmatched reaction time brings accuracy to new levels, increasing precision and profits.

Enhanced onboard diagnostics will identify noise, test for linearity and zero reference, and monitor drift. Diagnostics are enhanced by a unique load cell emulation feature which compensates for a failing load cell until a repair can be made.

o Up to 16 load cells can be used connected