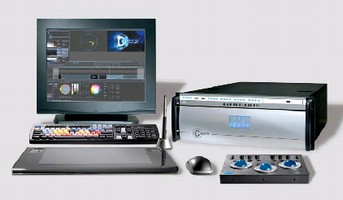 Providing scene detection in real-time, CLIPSTERÂ® offers multi-resolution, zoom-and-pan, conforming, color-correction, cropping, and versioning capabilities, all up to 4K. It works with uncompressed graphic sequences such as DPX or TIFF with 16-bit color-depth in real-time. Spycer(TM) software manages, searches, and views content and metadata, and also browses directories within context of current project. It gives overview of fragmented image sequences and enables high-speed copying processes.


At NAB 2006 DVS Digital Video Systems GmbH will present its flagship CLIPSTER® in the latest product version. The dailies business has now become a new field of operation for CLIPSTER®. The workstation has plenty of new features on board.

Hanover/Las Vegas. NAB visitors will be able to take a look at CLIPSTER's new feature package at booth SL2964. As a special highlight DVS has implemented the new content management system Spycer(TM) into the workstation's software. CLIPSTER® now provides scene detection in real time and supports the format 2K at 30p for US-commercial productions.

Cooperating with ARRI, DVS approaches the dailies business, enhancing workflows involving fil rushes. By combining the companies' products CLIPSTER®, DVS-SAN and ARRISCAN, a dailies workflow together with a film scanner becomes a reality. The benefits of this partnership: highresolution scanning combined with high-quality SD and HD capturing, guarantee an optimum result.

CLIPSTER® has been enhanced with a special new software feature: To maximize efficiency in the post house workflow, Spycer now provides the ultimate in data transparency. The application manages, searches and views content and metadata, and also browses directories within the context of the current project. The software feature "spys out" the project data, finding it on, if necessary, hundreds of terabytes of storage, without forcing the user to start any complicated search processes. In addition, Spycer gives an overview of fragmented image sequences and
enables high-speed copying processes.

With CLIPSTER®, post houses benefit in particular from a powerful real-time workstation with multi-resolution, zoom-and-pan, conforming, color-correction, cropping, and versioning capabilities - all up to 4K. CLIPSTER® is the world's only system that works with uncompressed graphic sequences such as DPX or TIFF with 16 bit color-depth, in real time, without having to render them beforehand. Scene detection is now possible in real time, too: CLIPSTER® cuts longer clips into shorter sequences thereby enabling the editor to color correct, conform and finish them easily.

Industry leaders and prominent post houses all over the world compliment CLIPSTER® on its wellengineered real-time features and format diversity. US-commercials providers will now benefit from CLIPSTER® supporting the format 2K at 30p allowing for high-quality converting to NTSC.

The new CLIPSTER® software enables various compressed formats such as JPEG2000, WM-9 and QuickTime. The system is based on a platform employing the latest technologies such as a 64-bit CPU and operating system architecture, as well as multi-core processor support. This increases greatly the overall processing speed of the system. Workflows requiring the highest level o flexibility, operator interaction and heavy throughput during conforming and finishing will benefit from the new features.

DVS with headquarters in Hanover, Germany and Los Angeles, USA has achieved sustained
success in 2005: CLIPSTER® won the prestigious Digital Cinematography Award. In addition to its cooperation with Hollywood film studios DVS teamed up with companies such as The Mill, Midnight Transfer, Sony, Kodak and Bang & Olufsen.
Share