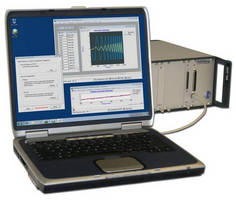 
Bellevue, WA - Microstar Laboratories, Inc. has announced the release of DAPtools 6.0 Software for its data acquisition products, extending the previous DAPtools 5 version of this software to support native 64-bit applications for Windows 7.

The included support software provides native 64-bit versions of the critical system service software. Primary among these is the DAPcell Server, the software that coordinates devices, networks, and the programming API, so that all Data Acquisition Processor devices share a common device driver system. Two other critical elements are the DAPIO programming API and the MSLACOM control panel configuration utility. The correct elements for your system are selected and installed automatically, depending on the version of the Windows 7 system you use.

Onboard Operating System Makes a Difference
Running in an embedded environment, where its job is to operate hardware and buffer data efficiently, a new edition of the DAPL 3000 software includes support for the newly-released xDAP 7410 data acquisition subsystem. The xDAP 7410 features a 2 GHz Intel Celeron processor. DAPL 3000 can sustain data transfers to the PC host at a composite rate of up to 8 million samples per second. If necessary, xDAP 7410 also can buffer up to a full minute of data "on board" at maximum sampling rates without any concurrent host transfers.

The new DAPL 3000 system also introduces some unique new sampling control features. You can configure, start, and stop multiple sampling processes independently. Or operate them in combination if you wish. For example, high-rate data capture with triggering analysis can run with one group of channels, while digital control lines are monitored at a much lower rate.

Additionally, some processing commands that were previously available only with certain application support packages are now included by default in the DAPL 3000 system commands module.

Conclusion and Next Step
The DAPtools 6 software release provides an easy step-up to native 64-bit applications for developers who need this. Compatibility is maintained as much as possible between the 64-bit and 32-bit versions, given the unavoidable differences in hardware word size and address space. DAPtools 6 software will be provided with each purchase of an xDAP 7410 data acquisition subsystem. The Basic software package is available now for download - to evaluate or upgrade - from the Microstar Laboratories Web site at www.mstarlabs.com/software/upgrades.html. Or contact the company to purchase a copy of the DAPtools Professional edition for developers.