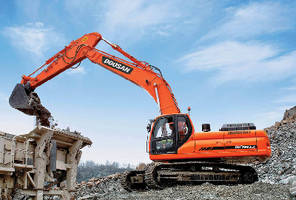 The DX350LC is powered by a 281-horsepower, 6-cylinder DL08K water-cooled diesel engine that has been optimized for use with cooled exhaust gas recirculation (CEGR) system, diesel oxidation catalyst (DOC) and diesel particulate filter (DPF). The engines in this configuration are optimized to reduce nitrogen oxides and after treatment is needed to reduce particulate matter, to comply with iT4 emission regulations. The turbocharged 466-cubic-inch engine features a common rail design with direct fuel injection, electronic control and four valves per cylinder.

The high-pressure common-rail (HPCR) system increases the efficiency of fuel delivery by increasing the pressure to 26,100 psi. The increased pressure allows the injector to inject a finer mist into the engine, which results in a more efficient combustion as required by the lower combustion chamber temperature due to the CEGR system.

The improvements in engine horsepower and torque, coupled with the 6 percent increased maximum pressure from the main control valve, mean increases in various workgroup functions.

Swing torque increased by approximately 8 to 11 percent, which allows the excavator to swing uphill more easily, as well as improve backfilling trenches. This leads to decreased time per foot of trench, improving productivity. Digging force has increased approximately 5 percent, which allows for more power in harsh digging conditions, leading to decreased cycle times and improved production in trenching applications.

A variable geometry turbocharger (VGT) is utilized to increase boost pressure at lower engine rpm. Controlled by the ECU, the VGT varies the amount of boost supplied to the engine to optimize combustion over the entire rpm range. The VGT also allows the engine to generate a greater amount of torque in a wider band in the rpm range, increasing engine performance at lower engine rpm. This improves machine performance in the standard and economy power modes while saving fuel.

The new closed center main control valve with electro-hydraulic pump control, exclusive to the DX350LC, allows the ECU to maximize engine power. This leads to an approximately 20-percent increase in efficiency of the main control valve, which leads to improved fuel economy. Workgroup performance increased approximately 10 percent compared to the Tier 3 DX350LC model. Smoother control and more accurate placement of materials is a result of the operator's ability to control the machine with more precise movement.

Doosan continues to focus on operator comfort with further enhancements to the roll-over protective structure (ROPS) cabin. Both a seat height lever and tilting function for the seat cushion were added to the seat to allow the operator to find an optimum seating position. The cabin mounting mechanism has been improved with a thickened dampening plate, and a coil spring has been added to reduce cabin vibration 20 percent, allowing operators to work longer days with less fatigue.

The door window position slider now locks in various positions, preventing it from moving from its intended location. Both front and rear glass windows are also adjustable. The door space of the cab has increased by 1.8 inches, allowing the operator to get in and out more easily. The cabin size has increased 6.1 percent, providing more headroom. The joystick angle has been reduced from 25 degrees to 19 degrees to provide a more ergonomic profile and decrease interference with operator's legs.

The DX350LC - like every Doosan machine - is covered by an innovative 48-hour parts guarantee. The program guarantees that if a "machine-debilitating" part is needed, Doosan will deliver this part to the end user within two business days or Doosan will pay for a replacement machine rental. 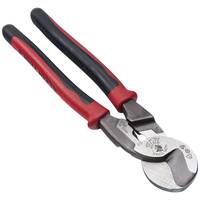 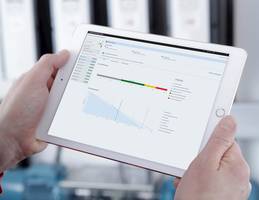 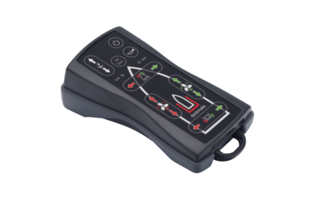 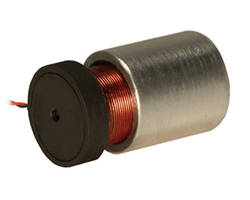