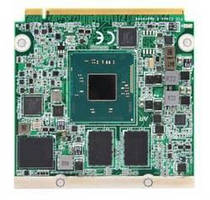 
ARBOR Technology, a leading IPC provider of embedded computing solutions, announces the immediate availability of the EmQ-i2301 Qseven module based on the Intel® Atom™ processor E3800 family and Celeron® processor N2930. All modules are fitted with ceramic capacitors making them ideal for industrial mobile applications in harsh environments. New features include an ample L2 cache, which can be shared by multiple cores, and a much faster Intel HD graphics unit compared with the previous generation. This turns new applications into visual experiences.

The Qseven modules are each equipped with 2GB of DDR3L memory and up to 16GB eMMC 4.5 for mass storage. Depending on which processor and memory type are used, versions with 4GB & 8GB of RAM are available. The integrated graphics are significantly more powerful than the previous model and support DirectX 11, OpenGL 3, OpenCL 1.2 and high-performance, flexible hardware decoding to decode even multiple high-resolution full HD videos in parallel.

Up to 2,560 x 1,600 pixels with DisplayPort and 1,920 x 1,200 pixels with HDMI are natively supported in the processor. It is also possible to connect up to two independent display interfaces via 24-bit LVDS and DisplayPort at DDI interface. The reserved signal for Analog RGB is available.

The following CPU variants are supported by the module: