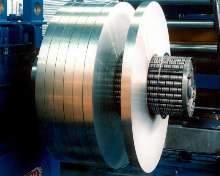 Slip Tech system consists of core winding surface made entirely of bearings, which reduce friction between core surface and winding drum. This eliminates excess tension in individual rewound coils during build up, resulting in ability to maintain consistent coil tension because each strip is independently tensioned from core to finished coil OD. Product can also eliminate need for looping pits in some applications.

In rewinding from a slitter to a common mandrel, friction between the inner core surface and the winding drum increases with the build diameter. Unfortunately, small differences in material thickness in individual coils tend to be magnified with the increasing build. As the resulting friction increases, the material tension also increases. This added, uneven tension causes individual coils to telescope and weave. Unfortunately, once the coil is compromised, it cannot be corrected by changes to end pressure.

The Slip Tech system consists of a core winding surface made entirely of bearings. These bearings dramatically reduce the friction between the core surface and winding drum, thus eliminating excess tension in individual rewound coils during build up. As a result, consistent coil tension can be maintained because each strip is effectively independently tensioned from core to finished coil O.D.
Share