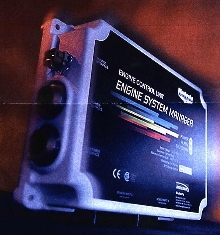 WAUKESHA, Wisconsin - (Nov. 16, 2001) - Waukesha Engine has introduced its Engenius(TM) ESM(TM) Engine System Manager that can put gas compression and distributed generation operators in total control of their engines, wherever they may be. A total engine management system, the Engenius ESM is directed by the Engine Control Unit (ECU) to optimize engine performance around the clock by monitoring speed, pressure, temperature and other engine conditions; controlling ignition timing, speed governing and stop/start functions; plus providing diagnostic help and fault logging when requested. According to Jim Drees, Power Generation and Controls Product Manager, "the Engenius is like an engine-mounted 'technician' that not only manages the engine for optimum performance, but can also be packaged to instantly communicate to an internet server, computer, phone or pager via satellite, cellular connection, radio frequency device or land phone line. "When Waukesha engineers set out to design an advanced engine system manager they kept four basic goals in mind: make it easy to use, make sure it boosts engine performance, make it add value wherever possible and build it to last. We feel that they've met these goals and more with the new ESM." Featuring easy "plug-and-play" set up, the ESM gives the user full access and control of data using standard MODBUS communication protocol, and manages the engine based on commands from a local control panel. The Engenius can keep an engine running even if sensors fail while optimizing spark timing for every speed/load condition with integrated detonation protection. Value-added features include self-calibration and self-diagnostics and built-in, permanent fault histories of alarms and shutdowns. These features should give operators the benefit of increased uptime through reductions in troubleshooting and diagnosing fault conditions, plus it allows the engine to keep itself "in tune" according to pre-set parameters. A simple connection to a laptop computer will provide complete engine readings while step-by-step troubleshooting instructions can guide the user through any alarm or shutdown code on-line. Offering field-proven performance for optimum uptime, the ESM is a solid-state device that's environmentally hardened, designed to withstand demanding applications and extreme weather conditions. Waukesha Engine is a manufacturer of spark-ignited, gaseous-fueled engines widely used in field gas compression, power generation, and other mechanical drive applications. Waukesha Engine also packages Enginator® gen-sets and DC switchgear controls for the distributed generation market.