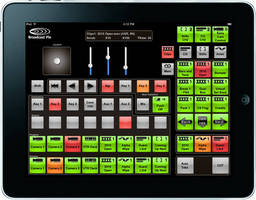 (Billerica, Massachusetts) The new Apple iPad is about to become a fully functional live video production system control panel. Broadcast Pix(TM) today announced iPixPanel, an application that will allow an iPad to control any of its Slate video production systems. The iPixPanel combines the iPad's user friendly touch screen and wireless control with a Slate panel's unprecedented feedback, which shows device and file name on the panel's buttons, helping users to create engaging live video. Apple is expected to ship the iPad later this month, and the iPixPanel application is expected to be available for download at Apple's App Store for $195 in April. Until then, users can try a portion of a control panel for free by downloading the Broadcast Pix iPixPad from the App Store, then run it on an iPhone or iPod Touch. Broadcast Pix will demonstrate both of its Apple apps at the 2010 NAB Show in Las Vegas, Nev., April 12-15 (Booth N4506). "Broadcast Pix has always been about harnessing new technologies to enable you to create the most compelling live video," said Ken Swanton, Broadcast Pix President. "Now, the iPixPanel on an iPad lets us bring a powerful control panel to individual producers that previously could not afford one - and wireless panels to larger production teams to expand their control options." According to Bob Bolling, a live video producer in Stanton, Calif., "At a recent fan event for a 3D movie that was broadcast live to millions worldwide on the Internet, I gave my iPod touch to one of the production directors and they used the iPixPad to pull up the next lower-third graphics for the show. This was a big help since I had my hands full switching two shows on the Slate system. She was on the other side of the truck, so the iPod was the only way to make it work effectively. This weekend, I'm doing a very large red carpet event, and I'm using three iPods with my Slate system. I can't wait to get my iPad, so I can run the entire show from the new iPixPanel app. " The iPixPanel will be able to control every aspect of a video production, including switching cameras, adding graphics and clips, controlling robotic cameras, and creating special effects like an interview with dual picture-in-picture. It is ideal for entry-level Broadcast Pix systems, such as the Slate 100, which is priced at $10,995 for a complete system. It also works on larger Slate systems, where a traditional control panel and multiple iPads can be used by a large team. The iPixPanel recreates a classic switcher layout, including auto transition and cut buttons, plus eight-input program and preview busses with shift for 16 inputs. It adds device controls for the graphics system, clips store, etc. It also features PixButtons, which dynamically change to show the device attached and even the file name currently loaded, so you can tell at a glance what is loaded on every input, key, and file library button. Slate owners will be able to download the iPixPanel application from the App Store, then add a wireless router to the Slate 100 for the freedom of handheld wireless control. According to Apple, the iPad will provide up to 10 hours of battery life and can be charged via a power adapter or USB connection to a computer. Apple's optional iPad Case can be positioned to hold the iPad in an angled operating position on a flat surface, which more closely resembles a traditional switcher experience. Like other iPad apps, it can be used either horizontally or vertically. When rotated, the iPixPanel will automatically rotate and reconfigure to fill out the entire screen. About Broadcast Pix
Broadcast Pix is the leader in integrated live video production systems. Its Slate systems create compelling live video, and they run unique Fluent software that provides a file-based workflow that streamlines production and improves functionality. With its integrated switcher, multi-view, CG, clip and graphic stores, and aspect and format conversion, Slate is a fraction of the cost of a control room to buy, staff and operate. Slate is future-proof, as it is upgradeable to 3G 1080p. Broadcast Pix is based in Massachusetts, with distributors worldwide. Customers include leading broadcast, webcast, podcast, cable, entertainment, mobile, corporate, education, religious, and government studios in over 70 countries. For more information, go to www.broadcastpix.com. Broadcast Pix, Slate and Fluent are trademarks of Broadcast Pix, Inc. Patented. Made in USA. Apple, iPad, iPhone, and iPod are trademarks of Apple, Inc.