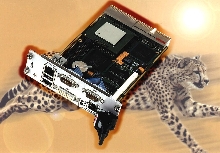 The new CP304 is a scalable 32-bit/33 MHz CompactPCI controller board designed to support all Pentium III FC-PGA and FC-PGA2 processors (370 socket), as well as low voltage versions and future generations of processors. The hot-swappable board can support up to seven 32-bit/33 MHz peripheral boards. Additionally, the CP304 features an on-socket SODIMM that enables memory upgrades of up to 512 MB SDRAM, further increasing the board's scalability.

The CP304 also increases system performance by providing double the available internal L2 on-die cache from 256 KB to 512 KB, the same capacity available in a Pentium IV processor. A higher clock rate from 1.0 GHz to up to 1.53 GHz; an increased memory speed from 100 MHz to 133 MHz; and two standard 82599-based 10/100Base-TX Ethernet channels also contribute to improved system performance.

The CP304 supports Microsoft Windows 2000 and XP operating systems in addition to real-time applications including Linux and VxWorks. It is also compatible with AdvancedTCA(TM) (ATCA) specifications (formerly PICMG Rev. 3.0).

EDITOR'S NOTE: Founded in 1975, PEP Modular Computers is a world leader in the design and manufacture of low power CompactPCI and VMEbus single board computers, systems and software for rugged, real-time industrial and military use. PEP was the first 3U VMEbus developer to achieve ISO 9001 certification. The company is the Industrial Automation branch of Kontron Embedded Computers, and has operations in the U.S., Germany, France, Great Britain, the Netherlands, Sweden, Korea, and Poland.