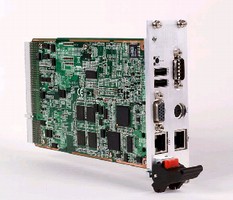 The MIC-3321 series are designed with direct-soldered CPU and memory, providing less weight and higher shock vibration resistance than traditional socket devices. "When designing the MIC-3321 series, we wanted to fulfill one of the most demanding requests that customers have been asking. We were excited to achieve the direct-soldered CPU's and also be able to provide units as small as 4 HP. In this new MIC-3321 series, there is a model to fulfill any application", said Alan Su, Project Manager.