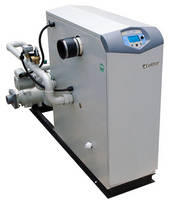 LEBANON, TN - Lochinvar Corporation, a leading manufacturer of high-efficiency water heaters, boilers and pool heaters, continues to raise the bar for innovative water heating technology with the enhancement of the XLP Commercial Pool Heater. Known for offering efficiency of up to 97 percent, inputs up to 800,000 Btu/hr and fully modulating 5:1 turndown, the XLP Pool Heater now features the re-engineered SMART SYSTEM user interface, providing an even greater level of control than ever before.

Proven XLP Design
The XLP Commercial Pool Heater Package consists of a high-efficiency stainless steel heat source, packaged and piped to a Cupro-Nickel heat exchanger. This external heat exchanger, which is salt water approved, features a shell and tube design that heats the pool water indirectly, completely isolating the water from the combustion process. Since the water is isolated from direct heat, maintenance costs are drastically reduced and the life of the pool heater is extended.

In addition, the XLP keeps installation costs to a minimum with CPVC water connections, which allow for easy integration into pool piping systems without the need to adapt from copper piping to CPVC. This innovative design, coupled with a small footprint and the enhanced new user interface, sets the bar for ease of installation and operation for commercial pool heaters.

Interface Improvements
The upgraded SMART SYSTEM control platform, which is now standard on all XLP Commercial Pool Heaters, is equipped with several new advanced features that offer installers and facility managers easier access to all of the information they need to set-up, troubleshoot and monitor all equipment functions.

As part of the new design, the SMART SYSTEM features a larger display screen - nearly twice the size of the original - to clearly communicate more information, as well as new color coding functionality. The interface displays a blue screen during normal system operation, while a yellow screen signals that maintenance is due and a red screen notifies the user that the appliance is in lockout mode.

Selectable Cascade Options
As with the original SMART SYSTEM on previous XLP models, the enhanced control features a built-in cascading sequencer that allows up to eight pool heaters to be installed, providing "Soft Start Lead-Lag" cascade operation. With Lead-Lag, one pool heater in the system is the lead unit, which modulates up to capacity based on demand; as demand increases, additional units are fired and the last two units called on modulate until all of them are operating at 100 percent modulation or until demand is satisfied.

However, the upgraded SMART SYSTEM also offers the additional option of "Efficiency Optimized" cascade operation, providing the user with two selectable functions for fine-tuning the sequencing of multiple unit installations. With Efficiency Optimized cascade operation, multiple units in the system modulate at the same firing rate to meet load requirements. With two cascade options, the installer can choose which modulation logic best fits his application.

A Smarter System
As an added option, the SMART SYSTEM now offers two-way communication through Modbus protocol. This new capability simplifies the interface between the Building
Management System (BMS) and the pool heater, while allowing the BMS to monitor up to 40 unit variables. The installer can also now access the SMART SYSTEM PC software via a standard USB cable instead of through a PC cable, as required on previous models.

In addition, the re-engineered SMART SYSTEM offers the Domestic Hot Water (DHW) Night Setback, which resets the DHW setpoint to save energy during times when there is no demand. Another major enhancement to the SMART SYSTEM control on the XLP Commercial Pool Heater is the addition of multiple 0-10V Analog Inputs and Outputs.