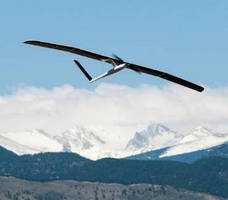 Able to carry up to 5 kg payloadsÂ and provide ~100 W of electrical power, SUNLINK-5 UAV (unmanned airborne vehicle) is capable of working at altitudes to 10,000 ft, can operate exclusively on solar power, and provides persistent presence in excess of 8 hr. Airframe, made from composite materials with integrated solar cells, is built to withstand multiple launches and landings, winds, and turbulence. Complete system includes autopilot, ground control station, and associated software.


EDISON, N.J. -- Sunlight Photonics Inc announced today the launching of a new product, SUNLINK-5, a small solar UAV (unmanned airborne vehicle) for commercial and civil applications in the low to medium altitude range.  Its primary power source comes from sunlight, which enables SUNLINK-5 to perform day-long missions.  Sunlight Photonics' UAVs are suitable for a variety of applications, including wireless communications, precision agriculture, land surveys, wildfire and wildlife monitoring, border patrol and so on.

SUNLINK-5 is a very unique, state-of-the-art platform in the modern UAV industry.  It is the first commercially available solar UAV, which is capable of operating exclusively on solar power.  Its current flight endurance is second to none in its class size.  Unlike light-weight, solar-powered UAV prototypes that were demonstrated before, SUNLINK-5 is a very robust and durable vehicle able to withstand multiple launches and landings, high winds, heavy turbulence and very demanding applications.

SUNLINK-5 has a unique airframe made from robust composite materials with integrated solar cells, which together enable effective collection of solar energy.  It is aerodynamically efficient and capable of carrying up to 5kg payloads, while providing about 100W of electrical power.  SUNLINK-5 can operate at altitudes up to 10,000 feet, providing persistent presence in excess of 8 hours.  A complete system includes the autopilot, ground control station and associated software, which greatly simplify UAV operations and dramatically enhance end-user experience.

Sunlight Photonics Inc is focused on development of SUNLINK(TM) solar UAVs and SUNFLEET(TM) wireless communications network systems and services. The company was formed in 2007 by a team of former Bell Labs and NASA scientists and engineers to address needs for a new generation of advanced PV and hybrid power systems and solar UAVs capable of high endurance and high performance that can be manufactured at competitive cost. Sunlight is addressing emerging applications, in which the advantages of its unique UAV designs, multi-mode power systems and communications technologies are effectively utilized. Solar UAVs represent a large growing market of global significance and the company's unique capabilities can address many of the outstanding challenges for successful implementation.