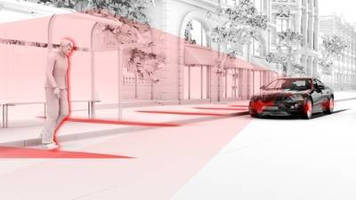 
- ZF TRW fusion systems are launching in Europe and Asia

"Fusing the data from camera and radar every 30-40 milliseconds helps to confirm when a situation warrants action from on-board systems such as rapid braking via the electronic stability control system for Automatic Emergency Braking," according to Ken Kaiser, vice president, engineering for the ZF TRW global electronics business. "These are highly complementary sensing technologies - radar is excellent for range and relative speed measurement, while cameras are best for lateral measurements and accurate recognition of objects."

"This same sensor set can be used with multiple radars and cameras and combined with ZF TRW's advanced safety domain electronic control unit to enable partially automated vehicle functions that will eventually evolve into the highly automated vehicle systems of the future," Kaiser concluded.

Purchasing both the camera and radar from ZF TRW brings added value - as a system integrator ZF TRW develops its own unique algorithms that yield faster response times and a greater range of functionality than buying discrete sensors from different suppliers These systems can also be designed and validated as an integrated package leading to faster time to market.

ZF is a global leader in driveline and chassis technology as well as active and passive safety technology. The company, which acquired TRW Automotive on May 15, 2015, is now represented at about 230 locations in some 40 countries. The two companies, which were still independent in 2014, achieved a sales figure exceeding EUR30 billion with 134,000 employees. As in previous years, both companies have invested approximately 5 percent of their sales in Research and Development (recently EUR1.6 billion) in order to be successful with innovative products. ZF is one of the top three automotive suppliers worldwide.