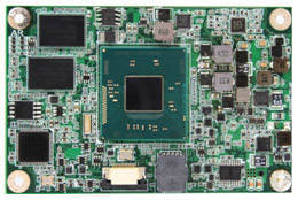 
ARBOR Technology, a leading IPC provider of embedded computing solutions, announces its latest COM Express Mini Type 10 module with a size of 55 x 84 mm and based on the Intel® Atom™ E3800 series of processors. Features of the latest Intel Atom generation include its single-chip design, an L2 cache able to be shared by multiple cores, and a much faster Intel HD graphics engine than the previous generation. The highlights of the module include its ultra-dense design, onboard soldered memory.

The Type 10 module pin-out is a refresh of Type 1 and uses the single 220 pin A-B connector. Type 10 COMs take advantage of modern display interfaces. The EmNANO-i2300 can support either TMDS (HDMI/DVI) or DisplayPort at DDI interface. In addition, it supports 24-bit LVDS channel.

The EmNANO-i2300 COM Express Mini module provides up to 4GByte of fast DDR3L onboard memory. The improved graphics supports DirectX 11, OpenGL 3.2, OpenCL 1.2 and high-performance, flexible hardware to decode multiple high-resolution full HD videos in parallel. Up to 2,560 x 1,600 pixels with DisplayPort and 1,920 x 1,200 pixels with HDMI are natively supported in the processor. It is possible to connect up to two independent display interfaces.

The following CPU variants are supported by the module: