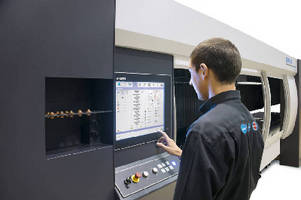 Touch-L also incorporates a part programming and nesting feature allowing users to import parts directly on to the control via a network drive or USB memory stick, apply cutting technology, nesting sheets and cut the nested parts directly at the machine.

Touch-L increases the efficiency and ease of use of Sirius, an automation-ready flying optics laser cutting system with a 120” x 60” (3000 x 1500 mm) work table format. Sirius features an integrated automatic shuttle table as standard with modular automation options for Sirius Plus, including a compact tower material warehousing system. Sirius is available with a powerful 2.5 kW or 4 kW CO2 Fanuc laser source.