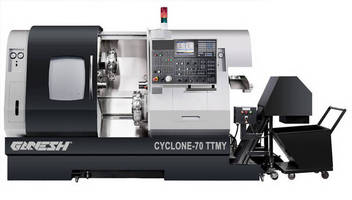 Suited for heavy-duty, complicated parts, Cyclone 70-TTMY isÂ 40 hpÂ machine with dual 16 station turrets and capacity for 32 live tools. Upper turret has full Y axis with Â±1.968 in. of off-center movement, allowing completion of off-center works in same chucking. Other features include Mitsubishi M-720 CNC control andÂ full C axis on mainÂ and sub spindle. Milling and drilling operations can be completed all in one operation on front- and back-side of work piece.


To Keep Manufacturing Industry in Pace, “Dual Spindle Dual Turret” technology is a key to success in today’s competitive environment. Combine CNC Turning & Milling Machine front and back for a finished part next generation’s CNC Multitasking – Multi Axis machine. Ganesh will show you how to meet tomorrow’s needs today by unveiling the new multitasking CNC machines. Ganesh Cyclone Series new machine models are well-suited for those who are thinking about how to remain competitive by both getting the job done in one handling and having ample tooling flexibility to have multiple jobs setup on the machines at one time.

The fast .3-second indexing of the dual 16-station live tool turrets helps keep cycle times low, and any combination of live tooling, or ID and OD static tools, can be mounted to provide 32-tool stations to get the job done right.

The TTMY series also provides ample tooling for complex work and the ability to have an entire family of parts tooled up on the machine for fast job changeover. Ganesh Cyclone 70-TTMY Rugged 23,900 lbs machine ask our application department how you can improve your process.
Share