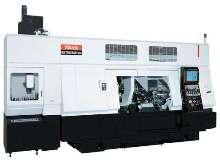 Multiplex Triple 8200Y features 2 horizontally opposed, 8 in. chuck headstocks with 12-tool turret for each side and lower turret with 9 tools that can work with both headstocks. Latter also provides 5 hp, 4,500 rpm milling spindle. Opposing spindles can be synchronized and simultaneously clamp long shaft workpiece for turning, milling, drilling, tapping, or Y-axis machining. Rapid traverse rates are 1,968, 787, and 1,968 in X, Y, and Z axes respectively.

For high production of chucked workpieces, the new Multiplex Triple 8200Y from Mazak exceeds all expectations for achieving high-speed, efficient production with no compromise on part accuracy and quality.

This newest Multiplex is a high-production CNC multi-tasking center featuring two horizontally opposed 8-in. chuck headstocks with a 12-tool turret for each side, and a third lower turret with nine tools that can work with both headstocks. Maximum swing is 12.6 inches. Moreover, the new lower turret with nine tool stations and a 5-HP, 4500-rpm milling spindle brings greater productivity and throughput. The opposing spindles can be synchronized and simultaneously clamp a long shaft workpiece for turning, milling, drilling, tapping or Y-axis machining. Smaller workpieces can be processed in the first spindle, then automatically transferred to the second spindle for subsequent operations. Or two workpieces can be machined simultaneously.

Productivity has been increased dramatically due to many factors. A new featured Z-axis super-positioning feature allows the lower turret and a upper turret to run for simultaneous machining, cutting cycle time. Rapid traverse rates are up in all three axes: from 1200 to 1968 ipm in X (upper turret); from 393 to 787 ipm in Y; and from 1299 to 1968 ipm in Z (upper turret). Compared to its previous model, milling spindle power is increased from 5 HP to 15 HP, and maximum milling spindle speed is 4500 rpm (with 6000 rpm optional).

Part variety also is greater as spindle bore diameter on the new Multiplex is 3 inches, up from 2.4 inches, meaning bar work capacity is 2.5 inches in diameter as opposed to 2 inches on the earlier model.

New design features on the Multiplex Triple 8200Y contribute to high machining accuracy. Symmetrical construction balanced by turrets and electrical cabinets on either side of the machine result in uniformly minimal heat distortion, with minimal effect on machining accuracy. Heat distortion is further minimized by an air gap between the headstock and headstock base. Oil and air lubrication in the turret and chilled oil circulating through the turret's mill housing also minimize any temperature increase.