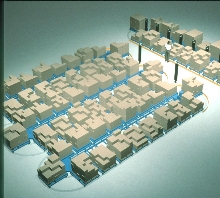 Horizontal pallet carousel systems are units of horizontally rotating shelves that move automatically in response to operator commands. Each carousel handles 12 to 100 pallet positions and can accommodate up to 3,000 lb per position, double-pallet high. They can store more items and more weight than conventional shelving while using up to 60% less floor space and 80% less cubic space.

Horizontal pallet carousel systems, developed by Remstar International, are an efficient and cost effective alternative to palletizers and gantry robots in operations requiring mixed pallet and split layer order building. These systems allow businesses to step up from manual operations to increase productivity and throughput.

In industrial applications, horizontal pallet carousel systems can significantly reduce order picking errors, and improve operator productivity and system throughput by as much as 300400 percent.

Horizontal pallet carousels are units of horizontally rotating shelves that move automatically in response to operator commands. Each carousel has a range of 12 to 100 pallet positions and can accommodate up to 3,000 pounds per position, double-pallet high. They can store more items and more weight than conventional shelving while using up to 60 percent less floor space and 80 percent less cubic space.

In a typical industrial system application, a wave of orders is downloaded to the picking workstation. A batch, or group of orders, is processed by the system software for commonality and automatically assigned a position on the put horizontal carousel. The operator scans a pallet's bar code and a bar code on the carousel's base plate to marry a specific order to a pallet.

The pick carousels automatically position for the first item selection. An adjacent pick light tower tells the operator the quantity. The operator disperses items in the quantity directed by the sort bar light on the correct pallets on the put carousel. The operator hits a task complete button, moves to the next waiting pick light and repeats the process. Both pick and put carousels automatically position themselves as soon as the operator hits the task complete button for the next pick, virtually eliminating operator idle time.

Once the operator has picked all of the orders in a batch, the completed pallets on the put carousel rotate to the back of the unit and empty pallet positions rotate to the front to create the next batch of orders. Completed pallets are removed from the put pallet by a lift truck and routed to shipping or consolidation.

Replenishment of the pick carousels can be done between waves, off-shifts, pre-determined times or between picks, depending upon order velocity.