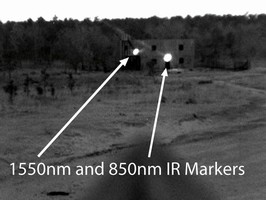 NIR/SWIR can see from near IR to shortwave IR portions of light spectrum. It utilizes indium gallium arsenide-night vision technology to detect and track broad range of battlefield IR lasers and can detect light wavelengths from 0.7-1.7 microns. Available in camera packages with 320 x 256 or 640 x 512 resolution, cameras are suited for various military as well as industrial machine vision applications.

PRINCETON, NJ, MARCH 13, 2008 - Sensors Unlimited, Inc., part of Goodrich Corporation (NYSE: GR) has launched a new night vision and laser detection camera that can see from the near infrared (NIR) to the shortwave infrared (SWIR) portions of the light spectrum, beyond what traditional night vision goggles can see. The camera, called NIR/SWIR, uses the company's proprietary indium gallium arsenide-night vision (InGaAs-NV(TM)) technology to detect and track a broad range of battlefield infrared lasers with heightened night and day time sensitivity. The NIR/SWIR cameras are being developed by the Sensors Unlimited, Inc. team in Princeton, N.J. within Goodrich's ISR Systems unit.

New processing techniques have pushed capabilities of the NIR/SWIR camera to see light wavelengths from 0.7 microns to 1.7 microns, whereas traditional night vision cameras can detect wavelengths up to roughly 1.0 microns. NIR/SWIR's expanded capabilities allow the end user to detect and track a wide range of military lasers including the covert eye-safe 1.5 micron laser, and to do so with a very small lightweight product. Because InGaAS-NV technology detects light, unlike today's small thermal night vision cameras that detect heat signature, the NIR/SWIR camera provides exceptional clarity in both day and night use.

Ed Hart, Vice President and General Manager for Goodrich's Sensors Unlimited, Inc. team, said, "Our NIR/SWIR technology expands the compatibility with current night vision systems while adding remarkable new capabilities for the warfighter. With the ability to see everything from the near infrared through the shortwave infrared portion of the spectrum, these new high sensitivity cameras are staying ahead of the curve in addressing customer requirements."

Goodrich Corporation, a Fortune 500 company, is a global supplier of systems and services to aerospace, defense and homeland security markets. With one of the most strategically diversified portfolios of products in the industry, Goodrich serves a global customer base with significant worldwide manufacturing and service facilities. For more information visit www.goodrich.com.