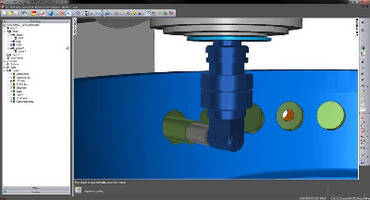 In FeatureCAM 2014 R2, multiple tools can be selected for roughing and rest-roughing, and complete machining sequence can be calculated in one operation. Right-angle heads allow internal pockets to be milled and internal holes to be drilled that would be inaccessible using conventional head. For parts needing wire EDM, FeatureCAM can project curve through stock and measure thickness of feature, allowing cutting conditions to be set at most suitable values.


Delcam has released the 2014 R2 version of its FeatureCAM feature-based CAM which provides support for milling and drilling with right-angle heads, and one-stop programming of multiple roughing operations.  Other enhancements in this release include better control of Z-level roughing, and improvements to Wire EDM and chamfering.

For full details, including video demonstrations of the new functionality, and to download an evaluation version of FeatureCAM, please go to www.delcam.tv/fc2014.

FeatureCAM was the world’s first feature-based programming software when it was launched in 1995.  Constant development since then has ensured that the system has retained its leadership in programming speed and ease of use, while an increased range of strategies has been added to provide more efficient toolpaths giving greater productivity on a wider range of machines.

Right-angle heads allow internal pockets to be milled and internal holes to be drilled that would be inaccessible, and so impossible to produce, using a conventional head.  They are now available as an option on an increasing range of machines, including an wide variety of mill-turn equipment.

FeatureCAM 2014 R2 is the first release that has the ability to program and simulate both milling and drilling with right-angle heads.  These new strategies will allow users to take full advantage of the flexibility of machines with this option.

A growing range of high-speed and high-efficiency area clearance strategies have been included in FeatureCAM in recent years, including Delcam’s unique Vortex strategy that was added in the initial 2014 release.  Vortex gives significant time savings by taking deeper cuts with solid-carbide tooling.  It allows the full flute length to be used as the cutting surface so increasing material removal rates and also maintains a controlled engagement angle for the complete operation to extend the cutter’s life and to protect the machine tool.

In FeatureCAM 2014 R2, multiple tools, for example, 20 mm, 10 mm and 5 mm end mills, can be selected for roughing and rest-roughing using these strategies, and the complete machining sequence calculated in one operation.  A stock model is created automatically after each tool is applied, which is then used as the basis for the program created with the next smaller cutter.  This regular updating of the stock model ensures that programs for the later tools are only created in areas where material still remains, so minimising air moves and optimising overall machining efficiency.

Rough machining has also been improved with a new option to set the direction in which Z-level roughing toolpaths are offset.  A simple button allows the user to select whether the part should be machined from the outside inwards or from the inside towards the outside.  An automatic option can also be chosen where FeatureCAM will decide the offset direction, depending on whether a core or a cavity shape is being machined.

For parts needing wire EDM, the model is often supplied only with a curve showing the shape to be cut rather than a fully-defined feature.  FeatureCAM can now project the curve through the stock and also measure the thickness of the feature.  The allows the cutting conditions, including feeds, speeds and power levels, to be set at the most suitable values for the EDM equipment.

The cutter compensation used by FeatureCAM can now be specified on an operation level so removing the need to create duplicate features in order to set different values.  The most common case where this will be needed is when different cutter compensation is required for the finish pass and for any subsequent chamfering operation.