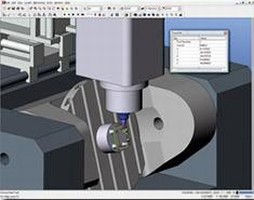 This latest version of the ESPRIT software is the result of a balanced effort focusing on both the shorter terms needs of its existing customers and the longer term direction of the metal-working community. A significant number of new, innovative technologies in the areas of 3- and 5-axis milling, feature recognition and user interface are being introduced with this new version, as well as a long list of productivity enhancing features for milling, turning and wire EDM part programming. ESPRIT 2009 is designed to run on both the Microsoft Windows XP and Microsoft Vista operating systems.

The new patent-pending FreeForm 5-axis composite machining cycle debuting in ESPRIT 2009 allows the user to independently define the machining pattern and the tool orientation strategy to be used when creating the simultaneous 5-axis tool path and includes 20 different machining strategies (cycles) in one, resulting in a wide range of easily manageable possibilities. The new ESPRIT composite machining cycle gives the user the ability to perform simultaneous 5-axis machining for a wide variety of different parts and industries, including aerospace, medical, and automotive, through one simple user interface.

Five-axis swarf milling, 5-axis contour milling and 3-axis z-level undercut machining round out the list of new machining cycles available for FreeForm machining in this new software release. By using these new multi-axis machining cycles, customers can gain flexibility by running their parts on either traditional mills or on the more advanced mill-turn machines while gaining productivity by reducing the number of setups required to completely machine their parts.

ESPRIT 2009 includes new support for CATIA, Pro Engineer and Autodesk Inventor (support also exists for SolidWorks and Solid Edge), in addition to support for assemblies and the ability to merge multiple CAD bodies - even when they are created in different CAD applications. Additional upgrades include support for multiple SolidWorks configurations, functionality that allows users to view the status of CAD files in the CAD feature tree, the ability to update imported CAD models that have been altered outside of ESPRIT, and the ability to customize the background of the CAD feature trees.

Graphics upgrades available in ESPRIT 2009 include panning, zooming and rotate-the-view functions that have been improved in the latest software release to more closely align with the viewing functionality in each CAD application. Controlling the graphic view is now possible from a 3D mouse, a standard mouse, or from the keyboard.

New associative technology in ESPRIT 2009 - defined as the recognition of a given part and its subsequent downstream activities - allows for the recognition of engineering changes made to a part model and the association between the original and changed part. ESPRIT retains the link to the original CAD file as well as a link to the faces utilized for each manufacturing feature created inside ESPRIT. If the CAD model changes, ESPRIT recognizes which faces have been changed, added or deleted, and will update the associated ESPRIT feature and ultimately the manufacturing processes.

Innovative new user interface
ESPRIT 2009 takes the previous redesign of the software's Operation Manager one step further with a new graphical user interface (GUI) for the ESPRIT Cutting Tool Manager. This new GUI presents the same look and feel for both milling and turning tools, with cutting tools being grouped by the milling head or lathe turret they belong to. The new tool manager also has better integration with the KnowledgeBase(TM) (cutting tool database). Icons show which tools have been added from the KnowledgeBase and which tools were created individually in the ESPRIT document, which can be easily added to the KnowledgeBase so they may be reused in other programs or by other programmers. Additional GUI upgrades include new dialogs for the definition of individual cutting tools, which are significantly simplified and now support the definition of the tool shank. The new GUI displays more accurate images of the tools to aid in more easily defining tool geometry.

The new ESPRIT 2009 FreeForm machining cycles also include a new style of user interface (technology page), which is docked on the left side of the screen and inside the ESPRIT Project Manager. This new user interface maximizes the area of the screen used for graphics, allowing the programmer to more easily identify which parameters should be used and what part features (geometry) should be machined. Selection of the machining parameters can now be made directly from the graphics and/or the dialog box. The new GUI is dynamic, only displaying those parameters that are required and pertinent to the task the user is performing. This new 3D user interface also includes a new 3D FreeForm Feature, which simplifies the definition of the multiple machining steps commonly performed in 3- and 5-axis - rough cutting, semi-finishing and finish cutting.

What's New in SolidMill and SolidTurn
ESPRIT 2009 places a heavy emphasis on integrated machining, the use of milling and, or turning in any combination on any type of machine tool - Swiss-turn, mill-turn, B-axis machines, etc. Therefore, as with the 3- and 5-axis improvement listed above, most improvements to the software are to the benefit of all programmers.

Other new or upgraded features highlighted in the 2009 release include improvement to the following machining cycles: facing, open-pocket machining, slot milling, chamfer milling and thread milling. Additional support for advanced coordinate systems has been added, including Rotate Tool Center Point (RTCP) programming for 5-axis milling, support for co-linear axes, and more automated tools for addressing the differences between the coordinate system used in the original design and the machining coordinate system (workpiece orientation).

Designed to distribute heat and wear more effectively than a single-point lathe tool, the new turning spinning-tool technology available in ESPRIT 2009 can increase productivity by up to 500 percent and tool life by up to 2,000 percent. This new cutting technology employs a specialized insert - similar in design to a round, or full-radius insert - mounted at the bottom of a cylindrical tool shank held in a rotary spindle. The advantage of the spinning tool is that there is no one single point on the tool that is in contact with the work piece all the time, and this is very good for heat dissipation and tool wear. Cutting conditions are no longer limited by the heat generated in the process, but by power available in the machine.

Wire EDM
The technology pages (user interface) for Agie 123 and AgieVision have undergone a complete transformation in ESPRIT 2009, bringing them to parity with all other wire EDM technology in ESPRIT. Agie customers can now take advantage of all the enhanced technology and advantages in ESPRIT Wire EDM, including automated draft feature recognition for geometry and solids, an underlying application programming interface (API), ease of use, and a new expert system for AgieVision and AgieVision V controls.