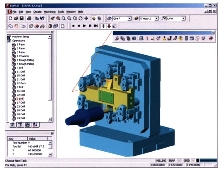 ESPRIT 2002 Plus has 65 enhancements and is available in 13 different languages, including French, German, Japanese, and Chinese. It has improved 4/5-axis support for 3D milling, C/Y-axis turning, EDM 4-axis tapering, and tool-path simulation and verification. Data exchange support allows it to read and perform machining directly from Inventor, Solid Edge, SolidWorks, CATIA, Unigraphics, and Pro/Engineer solid, surface, or wire-frame models.

Camarillo, CA- CAM market leader, DP Technology, announces the immediate availability of ESPRIT 2002 Plus, the latest release of its flagship CAM software product. ESPRIT 2002 Plus features a total of 65 new enhancements and is immediately available in 13 different languages, including French, German, Japanese, and Chinese.

"Using the ESPRIT 2002 product line, customers- a complex electronics enclosure manufacturer, for example- have documented productivity gains of as much as eight fold, met tight deadlines that entail completing 80% of their jobs within 24 hours, and reduced EDM programming time from 2 hours to 15 minutes. With the latest enhancements included in ESPRIT 2002 Plus, these numbers can only improve and these productivity levels are now attainable by a much larger audience," says Chuck Mathews, DP Technology Vice President.

ESPRIT SolidTurn
ESPRIT 2002 Plus SolidTurn, CAM for 2 - 22 axis turning, offers improvements in 16 different areas. ESPRIT now provides extended support for "C" and "Y"-axis milling operations performed on a lathe. Utilizing live milling tools, traditional milling cutting cycles such as contouring, pocketing, and drilling can now be programmed with any combination of turning cycles in any order to completely machine a part in a single set-up.

ESPRIT 2002 Plus features an upgraded, easier to use Sync List for multi turret/multi spindle machine tools that displays each operation, organized by head, turret, or spindle. The Sync List now provides a timing chart to view individual and total cycle times, along with the comprehensive control for synchronized and synchronous cutting operations needed to minimize cycle times.

ESPRIT SolidWire
ESPRIT 2002 Plus SolidWire, CAM for 2 - 5 axis wire-EDM, features 15 areas of advancements including upgraded machine-specific technology for Agie, Charmilles, Fanuc, Mitsubishi, ONA, and Sodick, among others. For parts with complex tapers, ESPRIT 2002 Plus now displays Sync Lines to help the user visualize the final shape- a feature particularly useful with the complex geometry common to aerospace and electronic parts. ESPRIT 2002 Plus offers new associativity for "Advanced Conics" programming by maintaining machining instructions for inserting taper and other cutting condition changes within the cutting profile even if the tool path is rebuilt.

CT-Expert, the Charmilles Technologies database of recommended cutting conditions, is now integrated into this new version of ESPRIT and is available as an option.

SMC value
ESPRIT 2002 Plus is shipped free of charge to all Software Maintenance Contract (SMC) subscribers as part of the regular software updates included in their agreement. North American customers will also receive the new English language Getting Started manual which provides detailed overviews of the new capabilities available in this release.

About DP Technology and ESPRIT
DP Technology is a CAM (Computer Aided Manufacturing) software market leader with a mission to provide CNC programmers with the most powerful CAM software ever. The company's vision of technology's potential and passion for excellence is captured in its flagship product ESPRIT.

DP Technology maintains it's worldwide headquarters and product development teams in Camarillo, California along with sales and support operations in Europe, Asia, and North and South America. For additional information about DP Technology and ESPRIT, call +1-805-388-6000, email DP at esprit@dptechnology.com, or visit them on the World Wide Web at www.dptechnology.com.