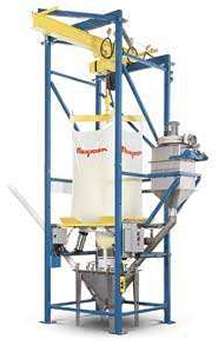 Central to the new design is a bulk bag/hopper interface consisting of a manual SPOUT-LOCK(TM) clamp ring positioned atop a pneumatically actuated TELE-TUBE(TM) telescoping tube. Together, the devices enable an operator to make a quick, dust-tight connection between the bag spout and hopper, and to automatically elongate the bag as it empties to promote flow and evacuation.

The high-integrity, dust-tight seal between bag spout and clamp ring allows full-open discharge from the bag, often eliminating the need for iris valves commonly employed to reduce the escape of dust by reducing the high initial rate of flow from the bag.

For applications requiring retying of partially empty bags, the company also offers a new Power-Cincher(TM) pneumatically actuated flow control valve. Unlike opposing bars that pinch the spout from two sides, the new valve contains a series of curved, articulated stainless steel rods that cinch the spout concentrically on a horizontal axis for easy tie offs, and vertically in a tight zigzag pattern to prevent leakage of fine powders.

Also making its debut on the new discharger is an integral Bag-Vac(TM) dust collector that creates negative pressure within the dust-tight system to collapse empty bags prior to retying and disconnection, eliminating dust emitted during manual flattening of empty bags.

The discharger is also equipped with FLOW-FLEXER(TM) bag activators that raise and lower opposite bottom edges of the bag at timed intervals, loosening compacted materials and promoting material flow into the bag discharge spout. As the bag lightens, the stroke of the bag activators increases, raising the bag into a steep "V" shape, eliminating dead spots for total evacuation of material with no manual intervention.

BFC Series dischargers feature a cantilevered I-beam with electric hoist and trolley to raise and position bulk bags without the use of a forklift. Also offered are BFF Series dischargers equipped with top-mounted receiving cups and removable bag-lifting frames for forklift loading of bulk bags.

All are fitted as standard with new Z-CLIP(TM) strap holders for rapid, secure insertion and removal of bag straps, and are available with integrated scale systems for loss-of-weight batching directly from bulk bags.

This new generation discharger overcomes limitations inherent with conventional designs, and unlike Flexicon's previous discharger, it is based on advances that are patented or patent pending.

Construction is of carbon steel with durable industrial finish, or stainless steel in industrial or sanitary finish, including designed and constructed for 3-A compliance.
Share