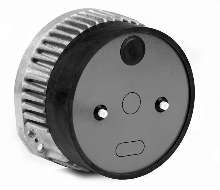 CMG Silicon Series operates like conventional dc motor and can be operated directly from battery or in conjunction with dc controller. It weighs 14 lb and measures 7 7/8 in. in diameter and 5 in. in length. Motor accommodates both IEC80 and 4F17 hydraulic pump mounting flange standards. Applications include hydraulic power units, robotics, marine propulsion, integrated starter/alternators, engine-generator sets, large centrifugal pumps, and power generation/co-generation.

Temple, PA - eCycle recently announced that a new brushless motor has been added to its product line. The CMG Silicon Series motor, with an integrated electronic commutator, can be operated much like a conventional DC motor, including that it can be operated directly from a battery or in conjunction with a DC controller.

A brushless motor drive typically consists of two parts - the motor and the amplifier. "eCycle integrated the essential electronics with the motor", said Dan Sodomsky, President and Chief Executive Officer. "This approach enables our motor to utilize an industry-standard DC controller. The result is a brushless motor that operates with the simplicity of a DC motor."

According to Sodomsky, eCycle uses the latest in semiconductors and other components, resulting in a vastly superior product. eCycle's CMG Silicon Series motor will raise industry standards in both performance and overall system cost, he said. For example, the motor accommodates both the IEC80 and 4F17 hydraulic pump mounting flange standards. Additionally, a wide range of shaft and bearing options are available.

"The CMG Silicon Series motors deliver tremendously improved performance over conventional DC motors," said Michael Sharer, Vice President of Marketing. "Customers can realize all the benefits of a brushless motor, with the ease of use generally associated with a DC motor. The same performance is often provided by Silicon Series motors using only 1/3 the current. Further, eCycle brushless motors are typically only 1/5 the size of comparable DC motors," he explained. "Battery powered applications benefit from both high efficiency and the solid state electronics, which eliminate costly parts such as relays and contactors," he added.