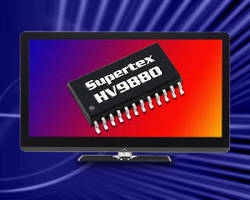 HV9880 includes LED wiring fault detection, which protects LEDs from harmful high currents when a connecting wire accidentally gets shorted to ground during manufacturing. By incorporating this protection, the IC eliminates the need for a separate high side current sensor, thus reducing system cost and complexity. The IC also features a peak mode current control scheme that controls output current within +/-3% accuracy over all line and load conditions.