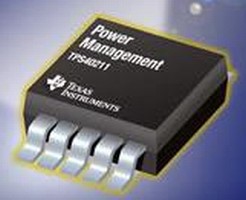 The TPS40211 efficiently drives high-power LEDs when the input voltage is less than the voltage to turn on the LEDs. The LED driver is designed to power multiple 1- to 5-W high-brightness LEDs in a series, and features a programmable closed soft start, over current protection with automatic retry and a programmable oscillator frequency. The device's fixed frequency current mode control provides improved transient response and simplified loop compensation. Designers have the flexibility to use the TPS40211 for boost, flyback, SEPIC and various LED driver topologies.

Pricing and availability
The TPS40211 is available today in volume from TI and its authorized distributors. The device is offered in a 10-pin PowerPADTM and a 10-pin SON package, and suggested resale price is $1.40 in 100-unit quantities.