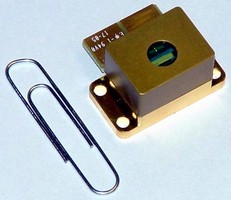 "The NECSEL-460-500, our first blue laser aimed at the microdisplay market, compliments the green NECSEL prototypes currently under evaluation by consumer electronics manufacturers," said Greg Niven, vice president of marketing for Novalux. "Our next step is to make available even higher power devices along with a red NECSEL source. Once combined into a single, RGB, solid-state light source, our NECSEL lasers significantly enhance display performance and enable simpler light engine architectures. They are the key to displacing the UHP lamps currently in use for microdisplay illumination."

Novalux's prototype blue NECSEL device emits over 500 mW at 460 nm-the "true blue" coveted by display manufacturers. It is housed in a revolutionary package smaller than a matchbox. All NECSEL sources produce color-saturated output, allowing them to reach a larger color space than competitive lighting technologies. They are also wavelength selectable, so integrators can create multi-primary laser displays that include colors such as cyan. Moreover, NECSEL sources provide bright, speckle-free output, resulting in clear, vibrant images unattainable by any other lighting technology. Other advantages include long lifetime, instant-on, low etendue and low cost integration.

Novalux will demonstrate its NECSEL light sources in a prototype rear-projection TV during the Consumer Electronics Show (CES) in Las Vegas, Nevada, January 5-8, 2006. "We are planning to show the first laser-based rear-projection TV ever at CES 2006," said Niven, "This initial prototype TV demonstrates our ability to dramatically increase display performance. The images are bright and the color is true-to-life. All this combined with a simpler, compact, lower-cost light engine reinforces our belief that NECSEL technology will change the paradigm for panel illumination."