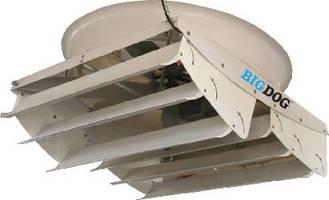 Suitable for cooling personnel and equipment, Big Dog(TM) Ventilator can also be slowed down to move less air for winter de-stratification. Unit has 72 in. diameter, 3 hp, belt-drive, variable speed circulation fan fitted with 6 fully adjustable fiberglass air deflectors, allowing air stream to be aimed wherever it is needed. At full power, air speed at fan outlet is approximately 1,500 fpm with total airflow of 50,000 cfm and efficiency of greater than 20 cfm/W.

Schaefer's 72" Big Dog(TM) ventilator is the right answer for large area cooling and de-stratification. Unlike HVLS (high volume, low speed) ceiling fans that move a lot of air very slowly with very little cooling effect, Schaefer's 72" Big Dog ventilator moves a lot of air (50,000+ cfm) at high speed for efficient and effective summer personnel or equipment cooling and can be also be slowed down to move less air more slowly for winter de-stratification (getting the trapped hot air down from the ceiling) for dramatic heating bill savings.

At full power, the air speed at the fan outlet is approximately 1500 FPM with total airflow of approximately 50,000 cfm (cubic feet per minute) and with an efficiency of greater than 20 cfm/watt. High efficiency results from the shape of the fan's venturi and the air straightening effect of the galvanized motor mounts. Air speed at ground level is dependent on the orientation of the deflectors, but can easily be in excess of a refreshing 100 FPM over an area 200' long by 35' wide, or 7,000 square feet.

At lower power, the Big Dog(TM) is a very efficient air de-stratifier, redistributing tapped hot air from the ceiling and dramatically reducing heating bills while using less than 300 watts.

The Big Dog(TM) is extremely quiet at all speeds and has been selected by several customers specifically to reduce noise levels in their factories.