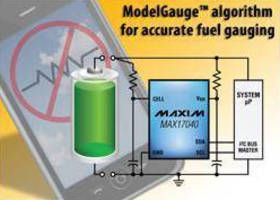 ModelGauge(TM) ICs require no current-sense measurement to estimate battery state of charge; 50µA operation is the lowest-power fuel gauging in the industry. SUNNYVALE, CA - Maxim Integrated Products (NASDAQ: MXIM) introduces the MAX17040/MAX17041 and MAX17043/MAX17044 1- and 2-cell fuel-gauge ICs. Using the Company's ModelGauge algorithm, these are the industry's only fuel gauges that accurately estimate the state of charge (SOC) of a Li+ battery without requiring current sensing. ModelGauge ICs eliminate the current-sense resistor and require very few external components, thus saving both space and cost. Because of their simplicity, low implementation cost, and small size, these ICs are ideal for handheld 1- and 2-cell Li+ battery applications like wireless handsets, smartphones, e-books, portable game players, digital cameras, handheld computers and financial terminals, portable navigation equipment, and portable medical equipment. The challenge: provide accurate measurement of battery capacity while minimizing cost and space
Traditional Li+ battery fuel gauges are mounted inside the battery pack and require multiple supporting discrete components, including a sense resistor. To provide the estimation of battery capacity, they rely on coulomb counters, which must then be calibrated-another added cost. Yet, coulomb counters also have a problem with even small ADC offset errors that accumulate indefinitely. To correct for these drifts, the battery must go into full, empty, or standby states on a regular basis. Some recent design advances have enabled implementation of the fuel-gauging function on the system side, instead of inside the battery pack. While this approach reduces the cost of the application somewhat, it has little effect on the board area. Finally, most price-sensitive applications save cost by measuring the battery voltage and using a simplistic lookup table, which results in unreliable SOC estimation (30% to 40% error), as load variations, temperature effects, and aging are not accounted for properly. Because of this, many system designers are barely comfortable showing even three to four bars to indicate battery state. ModelGauge technology enables accurate and economical Li+ battery fuel gauging Maxim's ModelGauge technology overcomes the limitations of voltage-only-based fuel gauging. The MAX17040/MAX17041 and MAX17043/MAX17044 ICs' sophisticated battery-modeling scheme provides excellent accuracy with very few external components. ModelGauge ICs track the battery's relative SOC continuously over a widely varying charge/discharge usage profile. These ICs do not require current measurement and they estimate battery state using voltage measurement alone. Therefore, they do not need a current-sense resistor and the board layout remains quite simple. Since the ground remains uninterrupted, troublesome grounding issues are also eliminated. All this means easier design-in. The MAX17040/MAX17041 and MAX17043/MAX17044 also eliminate several other discrete components and the coulomb counter, which results in an overall cost savings of 30% to 50% compared to traditional approaches. Moreover, because ModelGauge ICs do not rely on current measurement and the coulomb counter, they have no problem with offset drift and also eliminate the need for battery "relearn cycles." These ICs are shipped with factory calibration. This lowers manufacturing complexity and cost by eliminating calibration in the end-equipment manufacturing line. Finally, these ModelGauge ICs can be mounted on the system-side, instead of the battery pack. This allows the system manufacturer to control all costs, and minimize the complexity of supply-chain constraints, and reduces the expense of the battery pack. Broad-based benefits for portable, battery-powered equipment
These MAX17040/MAX17041 and MAX17043/MAX17044 fuel gauges use the lowest supply current in the industry (50µA, typ), which helps maximize the runtime. The 1-cell MAX17040/MAX17043 and 2-cell MAX17041/MAX17044 require only two or three resistors and two capacitors, thus using a very small area. The MAX17040/MAX17043's measurement and power-supply inputs connect directly to the battery pack, alleviating the need for a separate regulator. The MAX17041/MAX17044's measurement inputs connect directly to the battery pack and can be powered by 3.3V system power. Additionally, the MAX17043/MAX17044 have a programmable low-battery alert to warn the system microcontroller to take appropriate power-management actions when the battery is nearly empty. This feature further extends the battery life, as the system microcontroller remains in sleep mode longer without having to poll the fuel-gauge IC. Designed for the tight space of a battery-powered portable system, ModelGauge ICs are packaged in a lead-free 8-pin, 2mm x 3mm TDFN. They communicate with the system microprocessor over an industry-standard 2-wire interface. Prices start at $0.89 (MAX17040), $0.95 (MAX17041), $0.99 (MAX17043), and $1.01 (MAX17044) (10,000-up, FOB USA). For more information, please visit: www.maxim-ic.com/ModelGauge-ICs. Maxim Integrated Products is a publicly traded company that designs, manufactures, and sells high-performance semiconductor products. The Company was founded over 25 years ago with the mission to deliver innovative analog and mixed-signal engineering solutions that add value to its customers' products. To date, it has developed over 6300 products serving the industrial, communications, consumer, and computing markets. Maxim reported revenue in excess of $1.6 billion for fiscal 2009. A Fortune 1000 company, Maxim is included in the Nasdaq 100, the Russell 1000, and the MSCI USA indices. For more information, go to www.maxim-ic.com. Editors Contact: PR-USA@maxim-ic.com
Customer Service: 1-800-998-8800