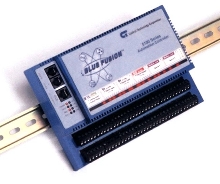 About Control Technology Corporation: Control Technology Corporation designs, manufactures and markets products that enable electronic automation devices to be controlled, configured or reprogrammed over the Internet and/or Intranets. CTC's automation controllers and software are used in a wide range of industrial and commercial applications, including Web-based control, motion control, analog and digital I/O control, and remote data acquisition. CTC's headquarters are in Hopkinton, Massachusetts with regional technology centers in Wisconsin and California. Founded in 1975, CTC is a leader in web enabled automation and has been awarded numerous patents in this area. More information is available at www.ctc-control.com.
Share