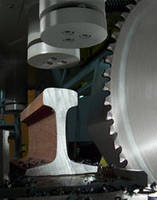 For all suppliers of rail track and related components, a newly designed automatic rail saw and handling system, engineered and built by Advanced Machine & Engineering of Rockford, Illinois, a longtime supplier of production carbide sawing systems to industry, is now available. Known as the AMSAW® R-Series, this new rail saw system outperforms all conventional circular and band saws for this application.

Prior to the installation of this new system, one customer, a rail supplier in the Southwest, cut rail on a hand-operated circular saw. While effective in making the proper cuts, the productivity was simply not keeping pace with customer demand at this fast-growing company. Serving Class I, regional and short line railroads, the customer maintains an extensive inventory of new and relay rail, frogs, switches, turnouts, specialty trackwork and accessories.

As a company official explains, "I saw an ad and contacted Advanced Machine, whose sales engineer then made a trip to see our operation. Our greatest concern was accuracy, as well as recognizing the speed and improvement in production possible with an automatic sawing system." He further explained his company had done business with Advanced Machine previously and that he had a trust level that gave him the confidence to call on them again for support.

After analyzing the process used at this fast-paced shop, Advanced Machine proposed the AMSAW® R300R, the company's automatic sawing system designed specifically for cutting rails. In comparison to the existing saw being used, which had a cutting time around three minutes, the clamp-to-unclamp time for a rail cut on the proposed machine was estimated at 32 seconds. This fact obviously interested the customer. "It was clear to us that, despite the capital investment required, this new system had great potential for our company."

And, this cost-to-benefit scenario was further developed, as the saw blade consumption was examined. The customer was typically using 70 saw blades every month on their previous machine, thus incurring substantial replacement costs plus the attendant downtime for blade changeover. The new system would require far fewer blades. Plus, the Advanced Machine carbide cutting blades could accept five retips and up to 40 resharpenings before replacement.

As part of the proposed system, the machine being considered also included an integral rail hole drilling station for the bolted joints at the rail ends. The AMSAW® R300R would function in tandem with cross-transfer and power infeed/outfeed materials handling equipment supplied by the customer. The rail lengths would be clamped, cut and drilled, then the scrap would be discharged and the finished rail would exit.

This long-term saving potential was not lost on the customer, who made the decision to proceed with the purchase, after consultation with company senior management.

Working with the customer's service technician, Advanced Machine's engineer supervised the installation of the new rail sawing system and it was running in full production mode within two working days, much to the customer's satisfaction. Currently, after many months in use, no service problems have been reported.

The AMSAW R300R system runs dry, thus there is no environmental impact. An onboard PLC monitors and maintains the production on the machine, as well as the infeed/outfeed material handling equipment. Pre-loaded ballscrews, as well as three vertical and two horizontal hydraulic clamps on the workpiece, maintain machine rigidity and ensure an accurate 90º angle cut on the rail ends. A specially-designed saw blade guide and dampening device are also onboard the R300R to provide all the functionality required for this rail customer's operation. The hardened spindle gears are ground for minimum backlash, while an electronic overload device monitors cutting performance and stops the saw feed, when required.

According to the customer, "We've been extremely satisfied. The results we're getting, both in terms of the cut time reduction and the blade life costs, convince us we made the right choice, going with this cut/drill machine system. Plus, the support we got from the team at Advanced Machine was first-rate, before the sale, during the installation and since then, as well."

The Advanced Machine rail saw system is freestanding and is also available without a drilling station for those uses where rail is to be butt-welded or friction-welded.

Interested parties may contact Advanced Machine & Engineering at the headquarters in Rockford, IL for more details on this story and the application of this rail saw/drill system.

Advanced Machine & Engineering Co., located in Rockford, Ill., is a global manufacturer and distributor of precision machine components, fluid power components, fixturing/workholding, power drawbar and spindle interface components, plus saw machines and blades. The company also designs and builds special machines for a variety of industries and provides machine rebuilding, retrofitting and contract manufacturing services. AME has partners and customers around the world and across the U.S. To learn more, visit www.ame.com.
Share