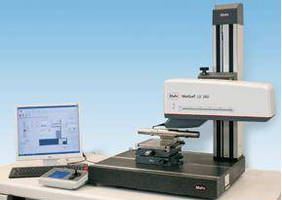 Along with respective travel lengths of 130 and 260 mm, MarSurfÂ® LD 130 and 260 feature biomimetic probe arm design with magnetic mounting and automatic probe recognition. Travel speeds up to 200 mm/sec and measuring speeds up to 10 mm/sec, depending on surface, reduce measuring cycle times, which are further reduced via dynamic probe response. Dynamic measurement force allows drive units to operate at angles of Â±45Â° from horizontal, promoting flexibility.

PROVIDENCE, RI - Building on the success of its industry-leading MarSurf® LD 120 system for combined surface and contour measurements, Mahr Federal has introduced a new generation of instruments with a number of improvements and innovations. Together the new LD 130 and 260 feature longer travel-the longest in the industry for the LD 260-the fastest positioning and measuring speeds in the industry, an innovative biomimetic probe arm design with magnetic mounting and automatic probe recognition, dynamic measuring force, extremely low residual noise, and a plethora of other improvements.

"Simply put," said Pat Nugent, Mahr Federal's Vice President of Metrology Systems, "our intent with the design of the LD 130 and 260 was to take the success of the MarSurf LD 120 platform and improve on it in any way we could. "One interesting example is the new probe arm designs, which are biomimetic, meaning their shapes mimic those found in nature. By using these new shapes we've been able to reduce probe weight by as much as 50% while maintaining the same rigidity, and thereby dramatically improving dynamic response."

The MarSurf LD 130 and 260 units feature travel lengths of 130 mm and 260 mm respectively. This not only allows measurement of much larger parts, but with travel speeds up to 200 mm/sec and measuring speeds up to 10 mm/sec (depending on the surface) measuring cycle times can be significantly reduced--as much as 50% in the case of a 260 mm steering shaft with gear tooth measurements at each end.

Improved dynamic response of the probe also helps increase measurement speeds and reduce measurement cycle time by allowing the probe to better track the part surface. In addition, dynamic measurement force allows the drive units to operate at angles of ±45° from horizontal, dramatically increasing the flexibility of the MarSurf LD 130 and 260 systems.

Both units have been redesigned to improve both safety and accessibility. The tip of the newly designed biomimetic probes is now below the lowest point on the housing, allowing improved access in more measuring applications. In addition, while the LD 130 and 260 retain the magnetic breakaway probe feature of the early LD 120 system, the entire lower housings on the new units are pressure sensitive so that in the event of unintended contact with another object an emergency signal is initiated and stops all movement of the drive unit.

Automatic probe recognition has also been improved. While RFID signals used on competing systems can cause confusion if two or more probes are in signal range, Mahr's automatic recognition system is measuring program specific and requires operator confirmation. Thus, the proximity of other probes is not an issue, and should another probe be mounted while an operator is on break, for example, he will be notified before resuming his measurement program.

Finally, the residual noise signal in the new MarSurf LD 130 and LD 260 units has been significantly reduced. This is the roughness "error" that would still be recorded if the probe traced a perfectly flat surface. In the MarSurf LD 120, this was specified at between 34 and 40 nm Rz. In the new units, this has been reduced by nearly 50% to 20 nm Rz. This is a significant improvement for those making ultra-high precision surface and contour measurements.

The MarSurf LD 130 and 260 systems for combined surface and contour measurement are available in a number of different configurations and with a wide range of probe design tips and other accessories.

Mahr Federal Inc., a member of the Mahr Group, has been providing dimensional measurement solutions to fit customer application needs for over 150 years. The company manufactures and markets a wide variety of dimensional metrology equipment, from simple and easy-to-use handheld gages to technically advanced measurement systems for form, contour, surface finish and length. Mahr Federal is also well known as a producer of custom-designed gages and a provider of calibration and contract measurement services. Mahr Federal's calibration laboratories are accredited to ISO/IEC 17025:2005 NVLAP Lab Code 200605-0 (see our Scope of Accreditation for accredited calibration processes). For more information visit www.mahr.com