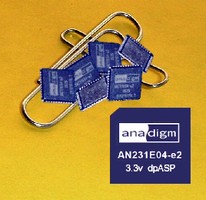 The AN231E04 is ideally suited for applications that require analog signal conditioning, filtering, gain control, rectification, summing, subtracting, multiplying, etc. It greatly reduces the design time and "time to revenue" of many applications by reducing the design time and expense of using traditional Analog and/or DSP in the analog domain. The reduction of power supply from 5 volts to 3.3 volts, with typical power in the 125 mW range, is of particular interest to designers wishing to build battery-powered devices. In addition, the doubling of performance allows the designer using the third-generation AN231E04 double the Analog Signal Bandwidth, from DC to 999 kHz to design with in all applications. And in a number of specific applications, such as UHF RFID "class 0" the increase performance allows for Analog Signal Bandwidth of greater than 2 MHz.

A major enhancement and customer-driven feature is the addition of "off set nulling", reducing typical CMOS OpAmp input offset voltages from 4 millivolts to under 250 microvolts. This feature is user controlled, so offset nulling can be performed automatically after configuration, or at any future time, allowing for adjustments as a result of environmental changes, such as temperature.

Configuration data is stored in an on-chip SRAM configuration memory. Additionally, an SPI-like interface is provided for simple serial load of configuration data from a microprocessor or DSP. This memory is "shadowed", allowing a different circuit configuration to be loaded as a background task without disrupting the current circuit functionality. "The AN231E04 was inspired by the feedback we received from our customers who needed more performance in applications such as in UHF Electronic Product Code fixed and portable RFID readers," said Richard Riker, President of Anadigm. "A key feature of the AN231E04 is that it can be reconfigured during operation - dynamically - by a microprocessor or DSP. This allows the AN231E04 to be programmed to implement multiple analog functions or adapt 'on the fly' to maintain precision operation under varying and changing environments. The AN231E04 is the base dpASP used in the RangeMaster2 product," Riker said.

Designers are able to utilize the power of the AN231E04 by programming the chip using AnadigmDesigner2 EDA software. This software allows designers to construct complex analog functions using configurable analog modules (CAMs) as building blocks. With an easy-to-use drag-and-drop interface, the design process can be measured in minutes, instead of hours or days, allowing complete analog systems to be built rapidly, simulated quickly, and then downloaded to the AN231E04 for testing and validation.

The AN231E04 is packaged in a 44-pin QFN (quad flat pack, no-lead) package- 7x7x0.9 mm ultra thin, and is ROHS (the European reduction of hazardous substances directive) compliant. Samples and production devices are available now. The suggested price, at 1000-piece quantity, is US $8.46. The AN231K04-DVLP3 development system is also available for a suggested price of US $199.00, which includes development board, copy of AnadigmDesigner2 EDA software, and user-friendly documentation. The award-winning AnadigmDesigner2 EDA software is also available as a free download after registering on the Anadigm Web Site - www.Anadigm.com.

About Anadigm®
Anadigm® brings platform-based design to the analog world with pre-qualified software and hardware components that allow complex analog circuits to be implemented by dynamically programmable Analog Signal Processing (dpASP). Designed to implement signal conditioning, filtering, data acquisition, closed-loop control, and other analog functions in a wide range of embedded systems, Anadigm® dpASP's are leading programmable analog ICs that can adapt on the fly to perform multiple functions, and adjust to different environmental conditions. For further information, visit Anadigm® on the Web at www.anadigm.com.

Anadigm® and AnadigmDesigner®2 are registered trademarks of Anadigm®. All other trademarks appearing herein are the property of their respective owners.