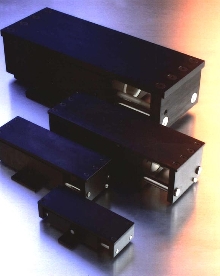 PORT ROYAL PA, February 1, 2002 - Vibro Industries manufactures a full line of Air-Operated Transporters that provide an innovative, time-saving solution to problems commonly associated with conventional conveying systems, such as routine and emergency shutdowns for cleanup and maintenance. Although originally designed to eliminate scrap-removal downtime in conveyor-driven collection systems for punch press, lathe and other machine-tool operations, Vibro Air-Operated Transporters have been creatively applied to a wide range of conveying operations in manufacturing and packaging.

The concept driving the Vibro Air-Operated Transporter is a pneumatic cylinder that operates on air pressure to move the product-tray back and forth, causing the material to steadily advance. The material advances on the slow-acceleration forward stroke, but remains stationary during the rapid return stroke - ensuring a constant progression. This provides a safe, reliable and effective means of product handling. Vibro Air-Operated Transporters are currently available in four models sized to meet a wide range of applications, and are easily adaptable to existing production lines. A compact design enables the Vibro Air-Transporter to be installed in cramped, congested areas, even where conventional conveyors will not fit.