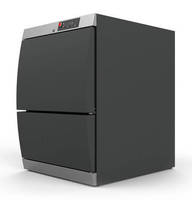 Major features include a four-stage filtration process, and a unique multi-sensor design to continuously monitor filter performance at all stages. Variable speed exhaust blower(s) maintain a constant airflow as particulates are captured first in a Pre-filter, then in a HEPA filter.  The third and fourth filtration stages capture fumes in a patented, market-first, dual carbon filter designed to enable consumption of all carbon while effectively removing fumes and maintaining a safe, clean-air environment.  Additionally, an integrated monitor alerts the user to dangerous levels of carbon monoxide (CO) in the ambient air and stops the laser system from processing until CO levels return to safe limits.

To see a demonstration of the UAC capabilities or to learn more about this technology, please contact  James Rabideau at 480-483-1214 ext. 214 or jrabideau@ulsinc.com.