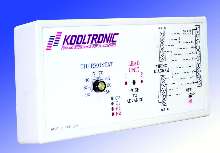 Model KLLC100 is optional for air conditioners equipped with 24 V relay and external connection. Suited for applications requiring multiple air conditioners on single cabinet, dual-stage device allows user to control operation based on either temperature or run-time. For fluctuating heat loads, Lead-Lag Controller will bring second air conditioner on-line as heat load increases, and shut it down as demand for additional cooling diminishes.

Pennington, NJ, January 30, 2004 - In response to strong customer interest and an increasing number of cooling applications requiring multiple air conditioners on a single cabinet, Kooltronic has developed the KLLC100 Lead-Lag Controller, an option for use with all Kooltronic air conditioners equipped with a 24V relay and external connection. This true dual-stage device allows users to control the operation of two air conditioners based on either temperature or run-time. For users with fluctuating heat loads, the Lead-Lag Controller will bring the second air conditioner on-line as the heat load increases, and shuts it down as the demand for additional cooling diminishes. It can be used to distribute the run-time over two units, balancing the service life of the air conditioners. "We're always looking at how our products are being used and listening to our customer's input and suggestions," remarked Kooltronic's Director of Sales and Marketing, Richard Wenstrom. "Applications using more than one air conditioner on a cabinet, either for extreme heat loads or as a redundant system, are becoming more prevalent. Adding a Lead-Lag Controller is an effective solution for users who need to maintain a critical cabinet temperature without interruption or failure," adds Wenstrom. The Controller features LED's to indicate which air conditioner is on the run cycle and whether a unit is in the cooling or heating mode, if so equipped. Other standard features include a built-in thermostat with adjustable set-point, deadband, sequencer and a universal mounting plate for simple installation within the cabinet. The Lead-Lag Controller can also be used with Kooltronic's line of Heat Exchangers. With over 45 years of service to its customers, Kooltronic is the leading manufacturer of air conditioners, heat exchangers, fans and blowers designed specifically to cool the interior of enclosures containing heat sensitive electrical/electronic components. The company has a complete manufacturing facility and sales office at its headquarters in Pennington, NJ and a regional sales office in Ventura, CA. For more information on Kooltronic's products, please contact: Darren Palmieri Marketing Coordinator Kooltronic, Inc. Tel: (609) 466-3400 Fax: (609) 466-1114 E-mail: dpalmieri@kooltronic.com