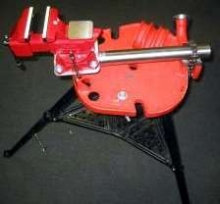 HandiDandy enables bench-mounted tools, including vises and chop saws, to be mounted to pipe stands. To form firm working base, stainless steel mounting plate is welded to stainless steel pipe. Bench-mounted tool may be fastened to mounting plate before or after HandiDandy is attached to pipe stand. Product is suited for jobs where pipes must be cut, threaded, or welded and ordinary pipe stand is used to mount work and provide stable base.

GDS, a specialty fieldwork contractor, introduces its patent pending HandiDandy that enables bench-mounted tools, including vises and chop saws, to be easily mounted to ordinary pipe stands. The HandiDandy has a stainless steel mounting plate welded to a stainless steel pipe that permits attachment to a pipe stand forming a firm working base. The bench-mounted tool may be fastened to the mounting plate before or after the HandiDandy is attached to the pipe stand. This productivity enhancer will pay for itself the first time it's used.

GDS provides orbital welding services, fabricates skid-mounted systems, especially for companies in the specialty chemical, gas handling, electronics and pharmaceutical business. It performs work at its facility as well as at a customer's jobsite.

GDS invented the HandiDandy out of necessity. On many of its jobs GDS works with pipes that must be cut, threaded or welded and an ordinary pipe stand is used to mount the work and provide for a stable base. It also found that many jobs required the use of a vise or saw but there wasn't a place to firmly mount them, unless its personnel went back to its truck or used the customer's facilities. This wasted time and decreased both productivity and profit margin. The HandiDandy Adaptor was invented to permit a bench-mounted tool to be quickly and easily attached to a pipe stand. This saved the company time and increased productivity and profit margin. Each time GDS used its HandiDandy other field contractors who saw it asked where they could get one.

Based on the interest generated each time GDS personnel used the HandiDandy it decided to make it commercially available to others that encounter the same problems GDS had before it began using it. GDS believes that HandiDandy users will find there work is made easier.
Share