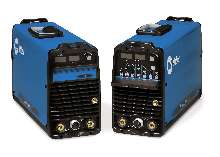 DynastyÂ® 200 offers welding range of 5-200 A ac and 1-200 A dc. Auto-Line(TM) technology enables unit to plug into any primary power, from 120-460 V, single or 3-phase, 50 or 60 Hz. It maintains steady welding output even if primary power varies widely. Wind Tunnel Technology(TM) protects electrical components and PC boards from contaminants such as dirt and metal dust created by grinding. Fan-On-Demand(TM) cooling system runs only when needed.

Like its DC-only cousin the Maxstar® 200, the Dynasty 200 features Miller's exclusive Auto-Line(TM) Technology. Auto-Line enables the Dynasty 200 to plug into any primary power in the world, from 120 through 460 volts, single- or three-phase, 50 or 60 Hz. Auto-Line works without any manual adjustments or linking mechanisms, which improves reliability. Further, Auto-Line maintains a steady welding output even if primary power varies widely.

"Unlike competitive TIG/Stick inverters, welding operators will never experience a fluctuation in the welding arc so long as the primary power remains within a 120 to 460 V range," said Jim Brook, product manager, Miller Electric. "With this type of primary power and weld process flexibility and size and weight, the Dynasty 200 meets the needs of those who weld both in the shop and the field."

Designed for the Field
For increased reliability in harsh conditions, the Dynasty 200 uses an airflow management design called Wind Tunnel Technology(TM). This protects electrical components and PC boards from contaminants such as dirt and metal dust created by grinding. The Dynasty 200 also uses Miller's Fan-On-Demand(TM) cooling system. The cooling fan only runs when needed, reducing the amount of airborne dust and dirt being pulled into the unit. This saves energy, prolongs the life of the unit, and operators really appreciate the noise reduction.

Dynasty Productivity
The Dynasty 200 provides the same advanced squarewave technology benefits as the more powerful Dynasty 300, but at about half the weight. The Dynasty 200 permits adjusting frequency from 20 to 250 Hz and adjusting electrode negative (EN) duration from 30 to 90 percent. By fine tuning these variables, operators can stabilize the arc, reduce arc wandering, obtain excellent directional control over the arc and puddle, establish the weld puddle faster and precisely place the filler and control bead width. Many operators report that it reminds them of welding steel with a DC arc.

Note that for optimum performance when welding aluminum with an inverter, Miller recommends using a 2% ceriated tungsten sharpened to a truncated (flat tip) point (2% thoriated will work as a second choice in a pinch). Do not use a pure tungsten or ball its end (the "old" practice).

The Dynasty 200's technology prevents the burn-through and warping that might occur on thin material and ensures better penetration at the root. Most importantly, creating a bead precisely the right width can reduce welding time 25 percent or more, reduce post-weld grinding and finishing, and lower consumables use.

Fabricators and manufacturers that use the technology in the Dynasty 200 in place of conventional squarewave technology have created the potential to bill an additional 10 operator-hours per week (in a 40-hour week) or raise billing rates by 25 percent. In certain aluminum welding applications and applications requiring portability, the Dynasty 200 can pay for itself in a fraction of the two-year time period purchasing agents often use for this type of equipment.

Two Versions
Two Dynasty 200 models offer options professionals demand by eliminating unnecessary controls and lowering the unit's price, or by adding features that enhance productivity or ease integration of the machine into an automated application.