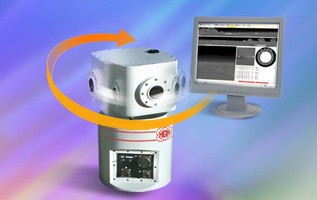 With sensor that contains 3 million pixels (10,000 x 288), IR Revolution 360, 20Â° vertical, 360Â° horizontal FOV panoramic vision system delivers high resolution imagery via rotating head that scans full 360Â° rotation/sec. Detector is based on HgCdTe imaging technology and operates in 8-12 micron wavelength, LWIR region. High sensitivity (less than 25 mK) IR camera detection range, without image distortion, is up to 1 km for human figure, up to 1.5 km for automobile, and up to 6 km for boat.

The detector is based on mercury cadmium telluride (HgCdTe) imaging technology and operates in the 8 -12 micron wavelength, the long-wave infrared (LWIR) region. The high sensitivity (<25 mK) IR camera detection range, without image distortion, is up to 1 kilometer (km) for a human figure, up to 1.5 km for an automobile, and up to 6 km for a boat or ship.

With wide area coverage (a full 360 degrees) and an ultra-fast image rate, the new infrared camera from HGH delivers the highest image quality available in any panoramic camera. The image control and display software is PC-compatible (XP Professional) and included with the camera package.

HGH Infrared's new IR Revolution 360 is housed in a compact, environmentally-sealed case that can easily be mounted atop a security vehicle, on a building, or on the ground. Ideal for perimeter security, force protection, passive surveillance for coastal and border areas, search and rescue, early detection of forest fires, airport traffic monitoring, and more.